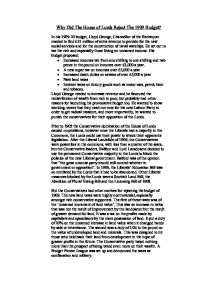 Why did the House of Lords reject the 1909 Budget

Why Did The House of Lords Reject The 1909 Budget? In his 1909-10 budget, Lloyd George, Chancellor of the Exchequer needed to find �15 million of extra revenue to provide for the new social services and for the construction of naval warships. He set out to tax the rich and especially those living on unearned income. His budget proposed: * Increased incomes tax from one shilling to one shilling and two pence in the pound on incomes over �3,000 a year. * A new super tax on incomes over �5,000 a year * Increased death duties on estates of over �5,000 a year * New land taxes * Indirect taxes on luxury goods such as motor cars, petrol, beer and tobacco. Lloyd George needed to increase revenue and he favoured the redistribution of wealth from rich to poor, but probably had other reasons for launching his provocative budget too. He wanted to show working-voters that they need not vote for the new Labour Party in order to get radical measure, and more importantly, he wanted to punish the conservatives for their opposition of the Lords. ...read more.

The first of these taxes was of the 'unearned increment of land value'. This was an increase in value that was not the result of improvement by the landowner but the result of greater demand for land. It was a tax on the profits made by capitalists and speculators by the mere possession of land. It put a duty of 20% on the unearned increase in land value when it changed hands by sale or inheritance. The second was a duty of 1/2d in the pound on the value of undeveloped land and minerals. This was designed to hit those who held back their land from development in the hope of greater profits in the future. The Conservative party hated nothing more than the prospect of being taxed even more on their wealth. A Budget Protest League was set up and denounced the taxes as confiscation and robbery. Conservatives argued that this was no ordinary Budget because it amounted to a social revolution. Opponents of the budget were worried by the prospect of redistributive taxation (taxation which takes money from the relatively rich and gives to the poor) ...read more.

Conservatives also felt that the people had got themselves into the situations they were in and the state shouldn't have to bail them out. They also argued that once Social Reforms were brought in the people would rely too heavily on the state and any welfare it offered, eventually they would become totally dependant and the nation would suffer greatly. However the Conservatives failed to notice that without the working class people of Britain the wealth of the state would be significantly less. In conclusion, I feel that the main reason the House of Lords rejected the 1909 budget was because the Conservatives were unwilling to co-operate with an opposition government, and were more interested in making sure the Liberals could not pass everything they wanted to and thus make it appear to the people of Britain that the Liberal Party were not doing what they had promised to. I am also of the opinion that the Conservative party were weary that the Liberal reforms were going to mean higher taxations and more money for the poverty struck people of Britain, whom many conservatives believed shouldn't rely on the state to get them out of their own problems. Dom Ansell L6P ...read more.