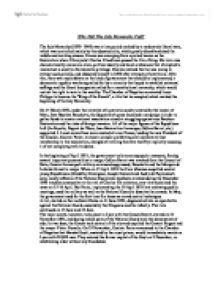 Why Did The July Monarchy Fail?

Why Did The July Monarchy Fail? The July Monarchy (1830- 1848) was a time period marked by a moderately liberal state, which was controlled mainly by the educated elite, which greatly disenfranchised the middle and working classes. France was emerging from a period known as the Restoration where Ultaroyalist Charles X had been passed the title of king. His term was characterized by economic crisis, political duality and harsh ordinances that attempted to reconstruct a society of aristocratic privilege. Charles realized that he was wrong to attempt such policies, and abducted himself in 1830 after attempts of overthrow. After this, there was much debate on the kind of government that should be implemented; a democratic republic was being called for by a minority that hoped to establish universal suffrage and the liberal bourgeoisie called for a constitutional monarchy, which would restrict the right to vote to the wealthy. The Chamber of Deputies nominated Louis Philippe to become the "King of the French", a title that he accepted which marked the beginning of the July Monarchy. ...read more.

A riot, started on the rue Saint-Denis on 14 June 1831, degenerated into an open battle against the National Guard, assisted by the Dragoons and the infantry. The riots continued on 15 June and 16 June. The major unrest, however, took place in Lyon with the Canuts Revolt, started on 21 November 1831, and during which parts of the National Guard took the demonstrators' side. In two days, the Canuts took control of the city and expelled the General Roguet and the mayor Victor Prunelle. On 25 November, Casimir Perier announced to the Chamber of Deputies that Marshal Soult, assisted by the royal prince, would immediately march on Lyon with 20,000 men. They entered the former capital of the Gaul on 3 December, re-establishing order without any bloodshed. Civil unrest, however, was permanent, and not only in Paris. On 11 March 1832, sedition exploded in Grenoble during the Carnival. The prefect had cancelled the festivities after that a grotesque mask of Louis-Philippe had been shown, leading to popular demonstrations. ...read more.

Its mouthpiece was Le National. The second one was conservative and supported peace with European monarchs, and had as mouthpiece Le Journal des d�bats. The trial of Charles X's ministers, arrested in August 1830 while they were fleeing away, became the major political issue. The left requested their heads, but was opposed by Louis-Philippe who feared a spiral of violence and the renewal of revolutionary Terror. Thus, the Chamber of Deputies voted on 27 September 1830 a resolution charging the former ministers, but at the same time invited in an 8 October 1830 address to the king Louis-Philippe to present a draft law repealing the death penalty, at least concerning political matters. This in turn provoked popular discontent on 17 and 18 October, with the masses marching on the Fort of Vincennes where the ministers were detained. In conclusion, I believe that the main fundamental reason for the failure of the July Monarchy was the lack of aggression and ambition portrayed by Louis Philippe. At the time The French masses wanted a heroic king in a similar mold to Napoleon but instead, they got a very cautious king. By Owen Taylor ...read more.