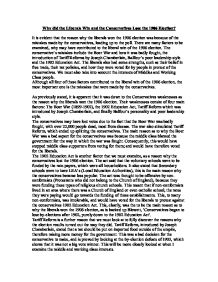 Why did the Liberals win and the Conservatives lose the 1906 Election?

Why did the Liberals Win and the Conservatives Lose the 1906 Election? It is evident that the reason why the liberals won the 1906 election was because of the mistakes made by the conservatives, leading up to the poll. There are many factors to be examined, why may have contributed to the liberal win of the 1906 election. The conservative's mistakes include the Boer War and how it was badly fought, the introduction of Tariff Reforms by Joseph Chamberlain, Balfour's poor leadership style and the 1902 Education Act. The liberals also had some strengths, such as their belief in free trade, their tax policies, and how they were voted for by people in protest of the conservatives. We must also take into account the interests of Middles and Working Class people. Although all four of these factors contributed to the liberal win of the 1906 election, the most important one is the mistakes that were made by the conservatives. As previously stated, it is apparent that it was down to the Conservatives weaknesses as the reason why the liberals won the 1906 election. Their weaknesses consist of four main factors: The Boer War (1899-1902), the 1902 Education Act, Tariff Reform which was introduced by Joseph Chamberlain, and finally Balfour's personality and poor leadership style. ...read more.

It is apparent that, compared to others, this factor has very little significance in the reason why the liberals won the 1906 election. Citizens may have also voted for the liberals in protest to what the conservatives were doing to the country. This is a reasonably strong factor compared to the others, because the liberals played on the conservative's weaknesses, and so looked more appealing to voters. For example, when Tariff Reform was brought into the conservative party by Joseph Chamberlain, the Liberals then strongly believed in Free Trade, therefore making their party look more attractive to the working class. As stated previously, the middle class people blamed the conservative government for the way in which it was fought. This would have consequently led middle class individuals away from voting for the conservatives, and towards choosing the liberals. The liberals may have also won the 1906 election because of the unions within it, although this would have been a less important factor. Unions such as the ILP (Independent Labour Party) may have attracted votes, because it was thought that only a new socialist/working class party could represent the working class properly. A Labour Representation Committee (LRC) was also formed, and were sympathetic to socialism but not keen on state ownership, this party, although, was not massively different from New Liberalism. ...read more.

The liberals, of course, believed solely in free trade and selling items for its face price. You can see from this short section on the middle class interests, that they didn't really influence the 1906 election, whereas the working class had greater dominance in the voting. From reading through this analysis of my view on why the Liberals won, and the Conservatives lost the 1906 election, you can see that my main argument is that it was down to the many mistakes that the conservatives made, that lost them the victory to the liberals. This is in comparison to the other three main points that I set out, which consisted of the Liberal strengths, the working class interest and the middle class interests. The middle class were the least influential as to why the liberals won the 1906 election, compared to the working class interests, who had many views on the way that the conservative government was run. You can clearly see the reasons why the conservative government in the early 1900's were not the most popular of groups, and why they were taken over by the liberal government in the 1906 general election, gaining 49.4% of the vote compared to the 43.4% that the conservatives got. ?? ?? ?? ?? ...read more.