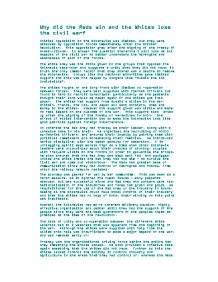 Why did the Reds win and the Whites lose the civil war?

Why did the Reds win and the Whites lose the civil war? Initial opposition to the Bolsheviks was limited, but they were attacked by opposition forces immediately after the October Revolution. This opposition grew after the signing of the Treaty of Brest-Litovsk. To answer the question therefore I will look at all aspects of the civil war to better understand the strengths and weaknesses of each of the forces. The White Army was the title given to the groups that opposed the Bolshevik take-over and suggests a unity that they did not have, in truth the only common factor that they shared was a desire to remove the Bolsheviks. Groups like the national minorities gave limited support and this was not helped by slogans like "Russia One and Indivisible". ...read more.

He organised the recruiting of 50000 ex-Tsarist officers, and ensured their loyalty by pairing them with political commissars and threatening their families. He introduced strict discipline, with the death penalty for desertion. His unflagging spirit kept morale high at a time when other Bolshevik leaders were unconvinced about their chances of winning, coupled with frequent visits to the fronts in order to galvanise the troops. He also ensured that the Red Army was kept well fed and equipped. Unlike the White Armies the Red Army had one aim- to survive the Civil War and come out victorious. The Reds had greater ease of communication since they had control of Petrograd and Moscow, from which the railway network radiated. The economy was geared for war by War communism. ...read more.

Trotsky was the organisational driving force behind the entire Red Army something the Whites lacked. He also provided a cohesive base again something that the Whites did not have. Further to this the Whites lacked control the ability to control industry and agriculture in the areas that they had control of, whereas the Reds could not only implement such policies, they could also enforce them. Finally the Reds had the common support of the majority of the people, along with being seen as less of a threat to their position than the various White groups were. From all of these reasons it can be deduced that not only were the Reds better prepared and better able to deal with a war, but also that it was inevitable that the Whites would lose. ...read more.