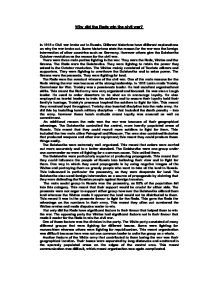 Why did the Reds win the civil war

Why did the Reds win the civil war? In 1918 a Civil war broke out in Russia. Different historians have different explanations on why the war broke out. Some historians state the reason for the war was the foreign intervention of other countries such as Germany. However others give the Bolsheviks October revolution as the reason for the civil war. There were three main parties fighting in the war. They were the Reds, Whites and the Greens. The Reds were the Bolsheviks. They were fighting to retain the power they seized in the October revolution. The Whites mainly consisted of Tsarists officers and supporters. They were fighting to overthrow the Bolsheviks and to seize power. The Greens were the peasants. They were fighting for land. The Reds were the eventual winners of the civil war. One of the main reasons for the Reds wining the war was because of its strong leadership. ...read more.

This influenced in particular the peasantry, as they were desperate for land. The Bolsheviks also used foreign intervention as a source of propaganda by claiming that they were defending the Russian people against foreign invasion. The main social group in Russia was the peasantry, as 80% of the population fell into this category. This meant that their support would be crucial for either side. The peasants were not eager to support either group however the Bolsheviks offered them land whereas the Whites made it apparent the land would not be distributed to them. This meant it was in the peasants favour to fight for the Reds. This gave the Reds the advantage on the numbers in their army. This meant they often out numbered the Whites armies and made disputes easier to win. Not only did the Reds have significant factors in their favour that helped them to win the war. ...read more.

However eventually the British and French evacuated the White's forces in the Crimea. Also one of the White armies generals, Denikin resigned from his position. This led to the Reds claiming victory in the Civil war. The Red army claimed victory in the civil war in 1920. There were many reasons why they won the war. They range from their extreme organisation to the Whites extreme lack of organisation. However the main reason the Reds won the war is because of their leader Trotsky. Trotsky incorporated all the main factors mentioned that included organisation and unity into the Red army that meant they were successful in their war effort. If it was not for Trotsky the reds would of suffered from lack of discipline, organisation and support as the White army did. However even though the Red army was victorious in the military sense of a war, some said that in political and social terms, the war would never end. ...read more.