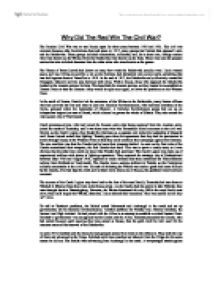 Why did the reds win the civil war

Why Did The Red Win The Civil War? The Russian Civil War was to tear Russia apart for three years between 1918 and 1921. The civil war occurred because after Revolutions that took place in 1917, many groups had formed that opposed Lenin and the Bolsheviks. These groups included monarchists, militarists, and, for a short time, foreign nations who were known as the Whites while the Bolsheviks were known as the Reds. There were also the peasant armies that also included deserters from the other sides who were known as the greens. The Treaty of Brest-Litovsk had shown to many how weak the Bolsheviks actually were. Lenin wanted peace and was willing to sacrifice a lot so the Germans had demanded very severe terms something that was held against them at Versailles in 1919. At the end of 1917, the Bolsheviks only effectively controlled Petrograd, Moscow and the area between both cities. Within Russia, those who opposed the Bolsheviks looked to the western powers for help. This benefited the western powers, as they wanted to re-establish an Eastern Front so that the German Army would be split once again, to lower the problems on the Western Front. In the south of Russia, Kornilov led the resistance of the Whites to the Bolsheviks, many former officers who had survived the war and went to join him. Socialist Revolutionaries, who had been members of the Duma, grouped under the leadership of Chernov. ...read more.

He had joined with the Allies in an attempt to establish a united Eastern Front. Kolchak's 'government' was recognised by the Czechs and the Allies. Kolchak persuaded the Czechs, who had raided Russia's gold reserves that were stored at Kazan, that the gold could be well used for the common cause of the removal of the Bolsheviks. In early 1919, Kolchak and the forces he had grouped around him went on the offensive. They took the city of Perm and advanced to the Volga. Kolchak could have marched on Moscow from the Volga but for some reason he did not. The British were advancing from Archangel in the north. A two-pronged attack against the Bolsheviks could have been successful, but it never happened. The British were to shortly pull out of Russia and the Whites probably lost their best opportunity to defeat the Bolsheviks. One of the main reasons the Reds won was because of Trotsky who, despite the Czech Legion crisis, was a brilliant War Leader. As he was untrained in military matters, Trotsky seemed to be a natural leader of men. His beliefs were simple, if a Red commander was successful in combat; they were promoted, if a commander failed and survived, he paid the price. Trotsky was willing to use ex-tsarist officers, as he knew that they had the military experience the Red Army lacked. Trotsky also knew that the first time the Red Army lost a major battle, it would spell the end of the revolution and all that the Bolsheviks had fought for. ...read more.

Reports reached London that the Whites had committed many atrocities on innocent civilians and the government could not afford to be associated with this. The senior British observer attached to Kolchak wrote to Lloyd George that Kolchak was a "disinterested patriot". In May 1919, Britain refused to recognise Kolchak and France did the same in May. The Red Army drove Kolchak and his disintegrating forces back to Siberia where he surrendered to the Communists. He died in their custody. White forces in the south of Russia were evacuated from the Crimea from November 1920 on. After success against forces in Russia itself, Trotsky then faced a challenge from Poland. Poland gained independence in 1918; who then invaded Lithuania, which contained a large Polish population, in 1920. France had given Poland a lot of support to do this, as they wanted a strong Poland on Germany's eastern side. However, the Polish army was not able to fight off Trotsky's Red Army. The Red Army broke through the Poles lines and advanced on Warsaw. The Red Army was only stopped from getting into the city by a large number of French volunteers based in Poland led by General Weygand. The French led a counter-attack against the Red Army. Lenin decided to cut his losses and agreed to the Treaty of Riga on March 18th 1921. As a result of this treaty, about 10 million Ukrainians and White Russians were put under Polish rule. The Treaty of Riga brought to an end the Russian Civil War. Within Russia, the Communist government under Lenin was now secure. ...read more.