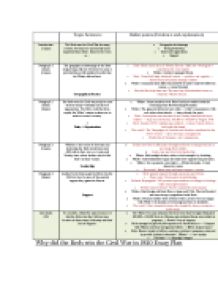 Why did the Reds win the Civil War - Russia essay plan

Transfer-Encoding: chunked ﻿Topic Sentence Bullet points (Evidence and explanation) Introduction (5 mins) The Reds won the Civil War for many reasons, but some are specifically more important than others. Some factors such as? * Geographical advantage * Strong leadership * Unity and organisation * Support Paragraph 1 (Short) (6 mins) The geographical advantage of the Reds helped them with the Civil war because it provided them with military benefits that the Whites did not have. Geographical Factors * Reds: Held central area of Western Russia ? Moscow + Petrograd = population for conscription * Whites: Scattered amongst Russia * Reds: Controlled large industrial centers ? produce war supplies ? deliver them efficiently amongst soldiers * Whites: Communication difficult, hundreds of miles separated different armies ? created disunity * How did this help them win? ...read more.

5 million men enlisted ? former Tsarist officers held with blackmail * The result?: The Campaigns of Kolchak and Deniken contributed to the Red?s victory ? (lack of troops, unorganised) * Production of weapons - war communism Paragraph 3 (6 mins) Without a clear sense of direction and leadership the Reds would have had difficulty in their success. Lenin and Trotsky were robust leaders who led the Red?s to their victory. Leadership * Trotsky traveled 65,000 miles throughout Russia assisting front line to encourage Red soldiers. * Lenin clear and structured leadership * Whites: Had multiple leaders who set bad examples by drinking. ...read more.

* The result?: Had committed troops who fought for them, ensuing in a better army. Conclusion (10) To conclude, I think the main reason as to why the Reds won the Civil war was because of their enemy?s disunity and their lack of support. * The White?s became infamous for their terror they brought. Estimated 100,000 ? 150,000 Jews in Ukraine and southern Russia were killed in pogroms. ? Result? Loss of support * Reds managed to gain 48,000-experienced Tsarist officers ? Compare with Whites and their unorganised efforts ? Effect of good army? * Reds: Ensure loyalty of officers and men, political commissars attached to provide ?political education?. Whites? ? Less loyalty * Disunity? ? Campaign example Why did the Reds win the Civil War in 1920 Essay Plan ...read more.