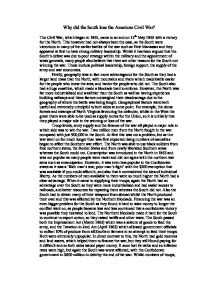 Why did the South lose the American Civil War?

Why did the South lose the American Civil War? The Civil War, which began in 1861, came to an end on 13th May 1865 with a victory for the North. This however had not always been the case, as the South were victorious in many of the earlier battles of the war such as First Manassas and they appeared at first to have strong military leadership. Whilst it has been argued that the South's defeat was due to poor strategy within the military and the appointment of weak generals, many people also believe that there are other reasons for the South not winning the war. These include political leadership, foreign support, the supply of the army and war economics. Firstly, geography was in fact more advantageous for the South as they had a larger land mass than the North, with mountains and rivers which made battle easier for the people who knew the area, and harder for people who did not. The South also had a huge coastline, which made a blockade hard to enforce. However, the North was far more industrialised and wealthier than the South as well as having experience building railways and these factors outweighed their disadvantage due to the geography of where the battle was being fought. ...read more.

He was resilient, honest and delegated jobs well as well as keeping in touch with public opinion and spending time over his party organisation, which ensured continued support of the Republicans and an appearance of unity between them. Leadership was important to the outcome of the war, as whilst military experience was useful in making tactical decisions, Lincoln's political leadership turned out to be far more effective in maintaining morale and unity, something which Davis failed at. Military leadership on the other hand was something in which both sides had their successes and weaknesses. However some of the South's military errors could have cost them the war. For example, it has been argued that whilst the South was tactically good, their generals did not match the Union ones such as Grant and Sherman. Robert E. Lee has been criticised for losing the West-and therefore the war- for the Confederacy, whilst his successor Beauregard made plans not based on reality. Bragg argued with everyone whilst Joe Johnston refused to take chances. The South has also been criticised for misjudging situations by losing their bravest men in costly attacks early on. However, the Union made many mistakes also, especially in the Virginia theatre and their mistakes did actually give the Confederacy a chance at victory. ...read more.

However as there were more and more casualties and the war continued for much longer than anyone had expected, the South became at a disadvantage as they did not have the money to finance a long war. Although the North could not really afford it either, they had gold reserves and money from customs in trade as an income to help them so they did not have to resort to acts and taxation as the South did. The North also had a much stronger economy, which was able to recover from the inflation much better than the South. As the North was industrialised it was much easier for them to supply their troops with both food and weapons due to the railroads, whilst this was much harder for the South as many of their railways had been destroyed by Union forces. All of these factors show that the South was at such a disadvantage regarding their troops, supplies and finance that they had no chance of ever winning a war which continued for that amount of time. Even though the South appeared stronger in the early battles, the fact that the North was so industrialised with a good economy and larger population of men of military age secured their victory in the long run. Chloe Hunter Total number of words- 2897 ...read more.