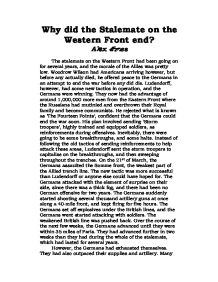 Why did the Stalemate on the Western Front end?

Why did the Stalemate on the Western Front end? Alex Lines The stalemate on the Western Front had been going on for several years, and the morale of the Allies was pretty low. Woodrow Wilson had Americans arriving however, but before any actually died, he offered peace to the Germans in an attempt to end the war before any did die. Ludendorff, however, had some new tactics in operation, and the Germans were winning. They now had the advantage of around 1,000,000 more men from the Eastern Front where the Russians had mutinied and overthrown their Royal family and become communists. He rejected what is known as 'The Fourteen Points', confident that the Germans could end the war soon. His plan involved sending 'Storm troopers', highly trained and equipped soldiers, as reinforcements during offensives. Inevitably, there were going to be some breakthroughs, and some halts. Instead of following the old tactics of sending reinforcements to help attack these areas, Ludendorff sent the storm troopers to capitalise on the breakthroughs, and then sweeping throughout the trenches. On the 21st of March, the Germans assaulted the Somme front, the weakest part of the Allied trench line. The new tactic was more successful than Ludendorff or anyone else could have hoped for. ...read more.

These attacks were meant to absorb Allied reserves, but instead they absorbed the reserves of the Germans. The Germans had lost over 1,000,000 men, and thereby lost their advantage in numbers, while the Americans were arriving constantly. This offensive proved to be Germany's last attack of the war. Counter-attacks soon followed, using the element of surprise. There was no previous bombardment, so the Germans weren't alerted in advance, and the Allies also used nearly 350 small Renault tanks. The Germans held them near Soissons, and checked other attacks near Rheims, preventing the salient from being cut off. The Germans then made a controlled withdraw from the salient. This was the turning point in 1918. The Allies then attacked at Amiens. The attack was planned in the utmost secrecy. Deceptions were created such as digging rear defence lines. The attack was made without any prior bombardment, with 430 tanks, 10 Canadian and Australian divisions, 4 British divisions, and 1 American division moving behind a 'creeping barrage'. Low flying aircraft were used to cover the noise of the tanks. The Germans were defeated by the tanks, and Allies made a 7 mile advance. Ludendorff called this day the 'black day of the German army' (8th August 1918). ...read more.

However, I believe another reason (though maybe not as important) for the stalemate's end was the arrival of the 'Tank'. It would have been terrifying for the Germans to see these machines coming towards them. The armour of the tanks also held against machine gun fire, so that these weapons of defence (which I have previously stated in another essay helped cause the stalemate) were countered. With infantry support, the tanks were almost unstoppable if used correctly. These tanks helped with the success of offensives. However, tanks were useless without large numbers of infantry in support, which with the arrival of the Americans, was easily made possible. The numbers of the Americans also meant that offensives were possible for the Allies, while the Germans, though they once held this advantage after the surrender of the Russians, didn't have enough men or equipment to mount many attacks. Combined with the new tactics and strategies of their generals, the Allies could really make their numbers count, while the Germans were forced to defend for most of the time, and they couldn't afford the casualties caused. So, in conclusion, I feel that the main reason for the breaking of the stalemate was the new strategies and tactics used by the Allies, but I also realise that the arrival of the Americans and the tanks were also important (though not as important). ...read more.