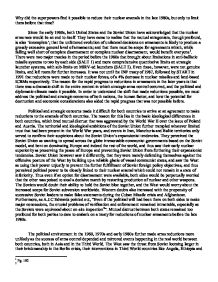 Why did the superpowers find it possible to reduce their nuclear arsenals in the late 1980s, but only to limit them before that time?

Why did the superpowers find it possible to reduce their nuclear arsenals in the late 1980s, but only to limit them before that time? Since the early 1960s, both United States and the Soviet Union have acknowledged that the nuclear arms race would be an end to itself. They have came to realize that the mutual antagonism, though profound, is also 'incomplete'; that the unfettered evolution of unilateral decisions on armaments is likely to produce a grossly excessive general level of armaments; and that there must be scope for agreements which, while falling well short of complete disarmament or complete nuclear disarmament, would benefit everyone1. There were two major treaties in the period before the 1980s that brought about limitations in anti-ballistic missile systems to two by each side (SALT 1) and more comprehensive quantitative limits on strategic launcher systems, with sub-limits on MIRV-ed launchers (SALT 2). Even these, however, were not genuine limits, and left room for further increases. It was not until the INF treaty of 1987, followed by START in 1991 that reductions were made to their nuclear forces, of a 4% decrease in nuclear missiles and land-based ICBMs respectively. The reason for the rapid progress to reductions in armaments in the later years is that there was a dramatic shift in the entire context in which strategic arms control occurred, and the political and diplomatic climate made it possible. ...read more.

The strategic balance of both nations also did not allow for reductions in terms of nuclear weapons. Before the Vietnam War, US had a clear superiority in terms of nuclear weapons, with 144 Polaris SLBMs and 294 ICBMs when the Soviet Union only possessed 10 ICBMs. Thus US wanted to maintain their clear superiority, as it gave them a strong strategy to deter Soviet aggression by threatening massive retaliation, and an edge in political matters and conflicts. USSR was positioned in a state of inferiority, and wanted to reach equality, in order to gain recognition as an equal superpower, and thus it was impossible to negotiate for reductions at this point. As Mason rightly pointed out, "Previous attempts at arms control had failed because they had always tended to freeze Soviet forces into a position of permanent inferiority. However by 1969, Soviet Union had overtaken US in ICBMS, and in 1971 had plainly surpassed US in this area, and reached a certain state of essential equivalence, even if US maintained their superiority in long range missiles, SLBMs and MIRVs. At this point, talks on limitations could begin, with the production of the SALT 1 accord of June 1972, when the United States limited missile launchers and anti-ballistic missile systems to two on each side. Even so, the SALT accords were not so much 'limitations' on both countries as the levels were still higher than their current levels and still gave them room for further increases. ...read more.

Economic considerations were also a major boost for arms reduction in the late 1980s. The arms race budget was spiraling, and reached a peak in 1985 in US at $401 billion, and pressure to reduce discretionary spending, intensified by the Gramm-Rudman-Hollings deficit reduction act, led to steady reductions in the defense budget through the remainder of the Reagan administration, which further encouraged them to accept Gorbachev's proposal for reductions. US was still recovering from a budget deficit after the Vietnam War, and growing inflation made it difficult for the US to sustain its economy, and reductions would allow US to shift more funds to its struggling domestic sector. On Soviet Union's side, it was suffering serious budgetary problems, and its domestic sector was backward and suffering from rampant unemployment, and structurally the Soviet model had made for large amounts of wastage and a lack of motivation amongst workers that had accounted for a large part of its economic problems. Gorbachev knew that he could not sustain the arms race, that Soviet Union was not able to meet the further challenge of SDI and the inflow of funds, and even if they managed it the domestic sector had to be revived and he regarded that a more important priority. All these aided the push for arms reductions in the late 1980s with the increasing pressure on both governments to cut down on their military budget and move funds to the domestic sector. 1 Pg. 102 2 ...read more.