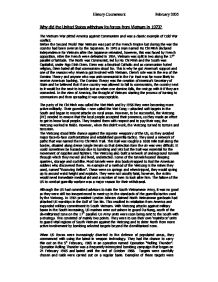 Why did the United States withdraw its forces from Vietnam in 1973? The Vietnam War pitted America against Communism and was a classic example of Cold War conflict. Before the Second World War Vietnam was part of the French Empire but during the war the country had been overrun by the Japanese. In 1945 a man named Ho Chi Minh declared independence for Vietnam after the Japanese retreated, however, this was faced by French opposition. After the French were defeated in 1954, Vietnam was split in two along the 17th parallel of latitude. The North was Communist, led by Ho Chi Minh and the South was Capitalist, under Ngo Dinh Diem. Diem was a fanatical Catholic and as communism hated religion, Diem hated all that communism stood for. This is why he got America's support and one of the reasons why America got involved with Vietnam. Diem's rule was in the era of the Domino Theory and anyone who was anti-communist in the Far East was far more likely to receive American backing. The Domino Theory was the creation of America's Secretary of State and he believed that if one country was allowed to fall to communism, the country next to it would be the next to tumble just as when one domino falls, the rest go with it if they are connected. ...read more.

One event that contributed to the reason why America withdrew its forces from Vietnam was the My Lai Massacre. This incident occurred on the 16th March 1968 when US helicopters landed close to the village of My Lai. Three platoons began a search and destroy mission and one of those platoons were ordered to kill villagers suspected of supporting or actually being Vietcong guerrillas. They had no proof who was who so there was brutal killings of innocent civilians and overall, around 175 - 500 people died. This is significant to America's withdrawal from Vietnam because Americans at home saw the images of the dead bodies of men, women and children on their TV and knew they had been killed by young Americans at war. The Americans public increased the pressure on the Government to withdraw from Vietnam. Protests were also an influence as to why Americans withdrew their forces from Vietnam. Probably the most famous of these protests is the student protest at Kent University in Ohio in May 1970. Some students joined hippy communities that preached love not war. They protested in a number of ways and some of these include teach-ins on why the US should leave Vietnam; Sit-ins to disrupt the draft offices; Blocking railway lines with human barricades to prevent the movement of supplies and troops and the burning of their draft papers. ...read more.

The Ceasefire lasted no time at all and the North attacked what was left of the South's army. By April 1975, the capital of South Vietnam (Saigon) had fallen. It was renamed Ho Chi Minh City and a united Vietnam came into being. In this essay, I have covered aspects of the Vietnam War that lead up to the inevitable withdrawal of American forces from Vietnam. I have looked at the evidence and I believe that the public and the media had a lot to do with the withdrawal, especially put alongside the events that happened in Vietnam. If images of the Tet Offensive or The My Lai Massacre hadn't have been broadcast across US televisions screens, the public wouldn't have realised the horror of the war, put pressure on the Government to withdraw and participated in the backing down of Johnson and the election of Nixon. There are clearly a lot of factors that lead up to the withdrawal in 1973, such as the lack of experience the American soldiers had, the advanced methods of guerrilla warfare and protests. However, for me, the media relate to the public, which evidently participated in the actions taken in, and concerning, Vietnam. I believe that the media and the effect this had on Americans at home was the greatest factor contributing to the withdrawal of forces from Vietnam in 1973. ?? ?? ?? ?? History Coursework February 2005 ...read more.