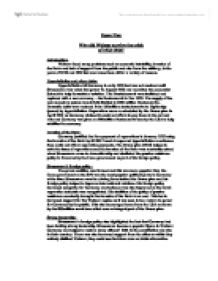 Essay Plan Why did Weimar survive the crisis of 1923-1924? Introduction: Weimar faced many problems such as economic instability, invasion of the Ruhr and lack of support from the public and also from the military, in the years of 1923 and 1924 but overcame them all for a variety of reasons. Hyperinflation and other debts: Hyperinflation hit Germany in early 1923 but was not resolved until Stresemann was voted into power in August 1923 and recruited the economist Schacht to help formulate a solution. The Deutschemark was abolished and replaced with a new currency - the Rentenmark in Nov 1923. The supply of the new monetary system was strictly limited to 3200 million Rentenmarks. Domestic debts were reduced from 150million deutschemarks to 15pfennigs (pence) ...read more.

Stresemann was the driving force behind the Dawes plan and his foreign policy helped to improve international relations. His foreign policy increased sympathy for Germany and leniency was also improved as the harsh reparation schedule was renegotiated. His abolition of the policy of passive resistance eventually brought the invasion of the Ruhr to an end. This led to increased support for the Weimar regime as it was seen to be a return to power for Germany by the public. This also encouraged loans from the USA as shown by the 800million mark loan which was an integral part of the Dawes plan. Strong leadership: Stresemann's foreign policy also highlighted the fact that Germany had been lacking strong leadership. ...read more.

They did not support Weimar but were willing to tolerate the constitution in order to avoid a civil war. This was shown when they were used by Weimar to suppress uprisings from the left. They did this by force however refused to engage in violent conduct towards the right wing uprisings but refused to support them also. This shows they were in favour of a right wing, more authoritarian government and were totally against communism. Other extremist attempts: Inadequate leadership, poor organisation and internal divisions meant that mass protests by the KPD in mid 1923 failed and were repressed without difficulty by the constitution who used the army to prevent the left wing uprisings having any real consequences. Conclusion: Several important factors that Weimar survived these crisis, the most important of these was a combination of strong leadership within the constitution and lack of any viable alternatives. ...read more.