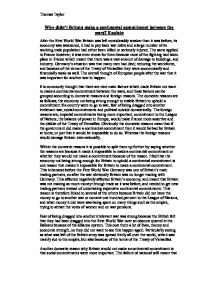 Why didn't Britain make a continental commitment between the wars? Explain

Why didn't Britain make a continental commitment between the wars? Explain After the First World War Britain was left considerably weaker than it was before; its economy was weakened, it had to pay back war debts and a large number of its working male population had either been killed or seriously injured. The same applied to France however; it was even worse for them because most of the fighting had taken place in France which meant that there was a vast amount of damage to buildings, and industry. Germany's situation was that many men had died; reducing the workforce, and because of the terms of the Treaty of Versailles they were economically and financially weak as well. The overall thought of European people after the war that it was important for another war to happen. It is commonly thought that there are nine main factors which made Britain not want to make a continental commitment between the wars, and these factors can be grouped according to domestic reasons and foreign reasons. The domestic reasons are as follows; the economy not being strong enough to enable Britain to uphold a commitment if a country were to go to war, fear of being dragged into another irrelevant war, social commitments and political suicide domestically. ...read more.

Overall social spending required forty per cent of government spending by 1930, of which thirty per cent was servicing the national debt. It is clear therefore that what money Britain did have was needed to be spent in Britain on in her empire. However this does not mean that it was impossible for Britain to make a continental commitment because of social reasons, she could have entered a commitment without any intentions of upholding the commitment if war was inevitable. People believe that it would have been political suicide for any government to have made a continental commitment for Britain at that time. Partially because of the fear factor; as I described above people were scared of being dragged into another irrelevant war after the suffering caused by the last war. The dislikes of the Treaty of Versailles because the public felt it to be too harsh, and wanted to change or reverse it, not make a commitment in Europe. Now I shall do the same for the foreign reasons; split them into impossible or did not want to. Imperial commitments mean that Britain had commitments to her empire, which constituted approximately one quarter of the land in the world. ...read more.

If Britain made a commitment to France then they would not change the treaty, which Britain wanted them to do. In conclusion, I feel that the main reason why Britain did not make a continental commitment in between the wars was the economy not being strong enough to enable Britain to uphold a commitment if a country were to go to war. I feel that this is the most important reason because If Britain did not have the money then they could not do something which would have a strong likelihood of leading the country into war they could not afford. Imperial commitments is second in my opinion because if Britain were to have entered a continental commitment they would have had to be able to go to war at any time. That would not have been possible, because there army was thinly spread over the world. Next is commitment to the League of Nations, because having a global commitment renders a European commitment pointless, however it would have been possible. Then I would put fear of being dragged into another irrelevant war as fourth, mainly because of the strong public opinion. After those four main reasons I would put; would make France even more assertive, balance of power, social commitments, dislike of Versailles and as least important political suicide. Thomas Taylor ...read more.