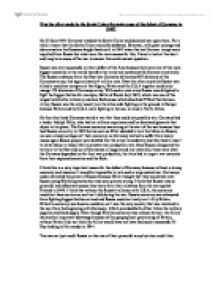 On 22 June 1941 Germany invaded the Soviet Union and declared war upon them. For a while it seem that the Soviet Union would be defeated. However, with great courage and determination the Russians fought back until in 1945 when the last German troops were expelled from Russia but what were the main causes for this, I have to look at the short and long term cause of the war to answer this controversial question. Russia was very successful on their defeat of the Axis because they were one of the most biggest countries in the world therefore her army out numbered the German army easily. The Russian advance from the East into Germany obliterated 607 divisions of the Germanys army; this approximately 6 million men. Even the other countries Russia was allied to could not compare to that figure; Britain and the U.S.A together could only mange 176 divisions of Germanys army. With such a vast army Russia was obligated to fight the biggest battles for example, Battle of Kursk July 1943, which was one of the largest tank battle in history and also Barbarossa which absorbed 75% of the German Army; Russia was the only country on the allies side fighting on the ground in Europe because Britain and the U.S.A were fighting in the sea, air and in North Africa. ...read more.

This was a short term problem for the Russians because this gave the Russians the ability to manufacture weapons and equipment for their vast army away from the battlefields, and gave the Russians an advantage over the Germans. Unlike the Russians the Germany did use their initiative which was to move her factories far from the war but instead left her factories vunerable from air raids from the British for example Dresden. Hitler overstretched his resources for example, troops were needed to fight the Russian front, large number of forces we needed to hold down conquered forces and sending troops to north Africa to help the Italians. Hitler knew that Germanys economy would not have been able to survive a war against such a powerful and huge alliance like Britain, USSR and U.S.A but once again Hitler's ideology got in the way. Even thought Russia had a huge army she still had to rely on her allies because the U.S.A and Britain dealt with affairs abroad like North Africa and Pacific and Atlantic wars, and also Bomb raids. Russia's resource weren't spread thinly thanks to her allies. Although the USSR had much to be credited for their success against German but it is also apparent that there were other factors that delivered the Germans to their doom. One of these important factors was that Hitler made was declaring war on to the U.S.A after pearl harbour, by doing so Hitler could not avoid Germanys the same mistakes of the first world war: a war on 2 fronts. ...read more.

The Allies had to be very careful in how they used the code so that the Germans would not catch on and change the code. I think this very important long term cause because with out the code the Allies would not be able to calculate their losses and they calculated it right so they would not have to major drafting of new recruits. If Hitler had known that the Allies had broken the code then I would have thought that the war would have carried on longer than it did; The Allies always had an upper hand on Germany. The main cause for Germanys defeat in 1945 is that her leader Adolf Hitler made many strategic mistakes for example Dunkirk and declaring war onto America. I think the main cause of Germanys defeat in 1945 was that Hitler was taking on more than a single nation could handle on its own; although Germany had Allies. I think that if U.S.A had not have come into the war when they did in 1940, I do not think that Russia could have lasted much long on the East on her own. There are many reasons for the defeat of Germany in 1945 many historians have there own interpretation and mine is that the defeat of Germany was Hitler's own fault. Hitler thought his 'Bark was better than his bite!' ?? ?? ?? ?? Was the effort made by the Soviet Union the main cause of the defeat of Germany in 1945? ...read more.