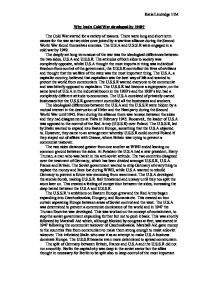 Why had a Cold War developed by 1949? The Cold War started for a variety of reasons. There were long and short term causes for the war as two sides once joined by a wartime alliance during the Second World War found themselves enemies. The U.S.A and U.S.S.R were engaged in a cold war by 1949. The deeply set long term cause of the war was the ideological differences between the two sides, U.S.A and U.S.S.R. The attitudes of both sides to society was completely opposite, whilst U.S.A thought the most important thing was individual freedom from control of the government, the U.S.S.R controlled the lives of civilians and thought that the welfare of the state was the most important thing. The U.S.A, a capitalist country, believed that capitalism was the best way of life and wanted to protect the world from communism. The U.S.S.R wanted everyone to be communist and was bitterly opposed to capitalism. The U.S.S.R had become a superpower, on the same level of U.S.A in the industrial boom in the 1920's and the 1930's but had a completely different attitude to economics. ...read more.

The U.S.A developed the atomic bomb, making U.S.S.R. feel threatened and uneasy until they too split the atom later on. This created a feeling of competition between the sides, increasing the deep hatred between the U.S.A and U.S.S.R. The U.S.S.R.'s ambitions on Eastern Europe grew and the Red Army began expanding into Czechoslovakia, Hungary, and Romania etc. This created an iron curtain separating Europe between areas of Soviet control and the west. The U.S.A was determined to prevent a communist dominance of the world and in 1947 the Truman Doctrine was developed. This was worked on the concept of containment, to stop the soviet government expanding further but not to push it back. This was shortly followed by Marshall Aid which, although blocked by congress at first, was started in 1947 following the communist takeover of Czechoslovakia. Marshall Aid gave money to the countries free from communism to make them strong enough to resist a Soviet takeover. This infuriated Stalin who saw it as an attempt to make U.S.A business dominate Europe. The U.S.S.R became even more determined to spread communism. The split of Germany between Britain, France and U.S.A and the U.S.S.R did not run smoothly. ...read more.

The whole event had made the allies very angry and distanced the two sides further as their hatred for one another grew. An air of competition between the success of communism or capitalism was created. Later two distinct armed sides were formed and U.S.A and U.S.S.R were officially enemies. The U.S.A joined N.A.T.O, a western alliance and in 1955 the U.S.S.R made the Warsaw Pact, an eastern alliance. This created a huge rift; East against West and a cold war was well underway. Although the sides never were in direct conflict, the war was one of words and politics rather than actions. The sides that were once united drifted apart after their common interest of defeating Hitler and the Nazi's was achieved. The reason for this distance between the sides can always be put down to their ideological differences as they never wanted the same things and were bound to come into conflict. A series of triggers happened after the end of WWII to further distance the underlying rift of the two sides' different ideals. U.S.A and U.S.S.R were official enemies by the 1950's due to a mixture of long and short term triggers and causes. Katie Lindridge 11M ...read more.