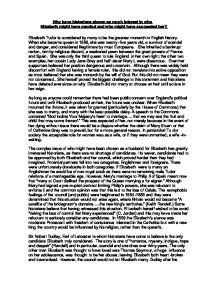 Why have historians shown so much interest in who Elizabeth might have married and who might have succeeded her?

Why have historians shown so much interest in who Elizabeth might have married and who might have succeeded her? Elizabeth Tudor is considered by many to be the greatest monarch in English history. When she became queen in 1558, she was twenty-five years old, a survivor of scandal and danger, and considered illegitimate by most Europeans. She inherited a bankrupt nation, torn by religious discord, a weakened pawn between the great powers of France and Spain. She was only the third queen to rule England in her own right; the other two examples, her cousin Lady Jane Grey and half-sister Mary I, were disastrous. Even her supporters believed her position dangerous and uncertain. Although there was widely held discomfort with England having a female ruler, this did not translate into active opposition as most believed that she was monarch by the will of God. But this did not mean they were not concerned.. She herself proved the biggest challenge to this statement and historians have debated ever since on why Elizabeth did not marry or choose an heir until so late in her reign. As long as anyone could remember there had been public concern over England's political future and until Elizabeth produced an heir, the future was unclear. When Elizabeth mounted the throne, it was taken for granted (particularly by the House of Commons) that she was to marry, and marry with the least possible delay. A speech to the Commons contained "God incline Your Majesty's heart to marriage.... ...read more.

She had no intention of fulfilling Philip's expectations of her as the grateful sister of his dead wife. Though more away from the limelight, it was much more likely that Elizabeth would have married either of the French princes, the Dukes of Anjou and Alencon. Although of a more suitable age, Anjou was a staunch Catholic and in marrying him Elizabeth would probably subject England to a civil and religious war. Despite his disfigurement and the fact that he was twenty years younger than her, Elizabeth and her council saw potential political advantages in Alencon and when he came over to England to visit in 1579, the general opinion at court was that they were to marry. However, traditionally France and England had been arch enemies and the prospect of such a union exacerbated many of the influential men in the kingdom's xenophobic hatred of the French and Catholicism. Alencon worked directly on the resolve of the queen; however she could not ignore political reality. The Privy Council said that they would support her only if it was what she wanted, but there was by no means an unreserved recommendation. In October 1579 Alencon realised the union would never happen and this also indicated the end to the English hopes that Elizabeth would ever marry. In reality, Elizabeth could have married Alencon if she had really wished to, as her Privy Council agreed to support her. However, historians believe it is likely her intentions of marrying were tainted by her resolve never to fall in love again after Dudley. ...read more.

It was not until 1587 that Eland heaved a sigh of relief as an heir emerged in the executed Mary's son, James VI of Scotland, who was a Protestant of moderate views and uninfluenced by France or Spain. He was a universal 'safe' candidate and luckily for Elizabeth, with similar views to her and a reserved personality so there was little chance of rebellions uniting behind him against Elizabeth. In conclusion, historians have debated extensively on why Elizabeth, despite opportunities, remained a childless spinster. There is no doubt that she was aware of the importance of her marriage, saying "There is a strong idea in the world that a woman cannot live unless she is married." However, in general Elizabeth remained irritatingly (and most probably tactically) elusive about the whole affair- it is unclear how much of the time she was playing diplomatic games, or whether she once did intend to marry. If the nobles of England could have foreseen that Elizabeth would elude her obligation to marry and produce a (preferably male) heir, she would probably never have been allowed to mount the throne. Her marriage was thought to be as much a matter of course, and as necessary, as her coronation. Ultimately, one historian, S. Doran reminds us of why there is so much debate- because "there is very little evidence" for a definitive answer. It could have been her supposed implacable hostility to marriage; a determination to rule alone; a bad state of health; traumatic childhood memories; or merely that Elizabeth never found a candidate approved by the Council who she thought was worth considering. ...read more.