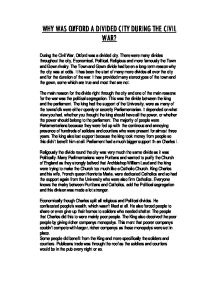 Why was Oxford a divided city during the Civil War?

WHY WAS OXFORD A DIVIDED CITY DURING THE CIVIL WAR? During the Civil War, Oxford was a divided city. There were many divides throughout the city, Economical, Political, Religious and more famously the Town and Gown rivalry. The Town and Gown divide had been a long-term reason why the city was at odds. It has been the start of many more divides all over the city and for the duration of the war. It has provided many stereotypes of the town and the gown, some which are true and most that are not. The main reason for the divide right through the city and one of the main reasons for the war was the political segregation. ...read more.

Many Parlimentarians were Puritans and wanted to purify the Church of England as they strongly belived that Archbishop William Laud and the king were trying to make the Church too much like a Catholic Church. King Charles and his wife, French queen Henrietta Maria, were dedicated Catholics and so had the support again from the University who were also firm Catholics. Everyone knows the rivalry between Purtitans and Catholics, add the Political segregation and this divison was made a lot stronger. Economically though Charles split all religious and Political divides. He confiscated people's wealth, which wasn't liked at all. He also forced people to share or even give up their homes to soliders who needed shelter. ...read more.

The Town and Gown divide was also much like the economical divide, as the dons and scholars from the University were very rich and led magnificent lifestyles. By comparison though the Town were comparatively poor. This is also linked Religously as most members of the University were High Anglicans. As the Civil War approached, it was clear that the University were going to support King Charles. It was not suprising; therefore, that many townsfolk were going to support Parliament. In conclusion, divisions were made all the way throught the city. All linked in some way. The Gown were rich, heavy puritans and much in favour of the king. The Town were poor, mostly Catholic and supported Parliament. There were exceptions to these divides, not all townsfolk were poor and not every gown were puritan, but mainly these were the divides throughout the city of Oxford. ...read more.