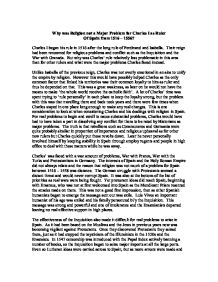 Why was Religion not a Major Problem for Charles I as Ruler Of Spain from 1516 - 1556? Charles I began his rule in 1516 after the long rule of Ferdinand and Isabella. Their reign had been renowned for religious problems and conflict such as the Inquisition and the War with Granada. But why was Charles' rule relatively less problematic in this area than for other rulers and what were the major problems Charles faced instead. Unlike Isabella of the previous reign, Charles was not overly emotional in an aim to unify the empire by religion. However this would have possibly helped Charles as the only common factor that linked his territories was their common loyalty to him as ruler and thus he depended on that. This was a great weakness, as later on he would not have the means to make 'the whole world receive the catholic faith'. A lot of Charles' time was spent trying to 'rule personally' in each place to keep the loyalty strong, but the problem with this was that travelling there and back took years and there were few times when Charles stayed in one place long enough to make any real changes. ...read more.

As it had been based on the Muslims and the Jews in previous years now was becoming vigilant against Protestants. Once they discovered Protestants they seized them, just as it had stopped the mysticism of the Illuminists in the 1520s and the Erasmists. In 1547 censorship was introduced with the Papal Index actively banning a number of books, so the Inquisition began to seize major imports at all the large ports. Even so Lutheran ideas were carried across to Spain, but as more arrests were made and the Inquisition put fear into people the idea wasn't followed. This shows another good reason why religious issues never exceeded a high enough standard to cause problems. The inquisition had become so good at stamping out unwanted religion even Luther and Calvinist ideas could never break into Spain as the Protestants were stamped out, in a way the Inquisition isolated Spain from the rest of Europe as there was also little commitment to the renaissance. As a result of having nothing else to follow in Spain, a new wave of Spanish culture returned. Poetry inspired by 'Juan Boscann' flourished and people became once again interested in what the Spanish scholars could do, in some respects nationalism took hold of the people. ...read more.

However Charles did not have this problem his policy was to be seen as the Protector of the Catholic Faith and his policy when it could be directed at something other than war was focused on this. It would be wrong to say that the reign between 1516 and 1558 went by completely problem free though. In his final years 1557-58 there was a religious crisis in Seville where further policy was set by the regents in charge to cut off Spain from all foreign ideas as it was a 'threat to the security to the state'. Charles was not present and again this did not pose him personally a major problem, which is possibly part of the answer to the initial question. Why did religion not pose a major problem to Charles I as ruler of Spain? Because he was not only ruler of Spain he was the Holy Roman Emperor and had other major problems to deal with, yet in Spain too the inquisition and the cultural revolution managed to keep the protestant threat from Europe out for long periods of time. Revolts were dealt with quickly and efficiently and Europe's problems were seen to be far away and unlikely to ever cause problems in Spain. ...read more.