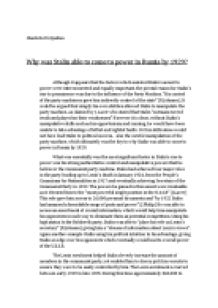 ﻿Charlotte McQuillan Why was Stalin able to come to power in Russia by 1929? Although it appears that the factors which assisted Stalin?s ascent to power were interconnected and equally important, the pivotal reason for Stalin?s rise to prominence was due to the influence of the Party Machine, ?His control of the party machinery gave him indirectly control of the state? (R.Johnson). It could be argued that simply his own abilities allowed Stalin to manipulate the party machine, as claimed by J. Laver who stated that Stalin ?outmanoeuvred rivals and played on their weaknesses? However it is clear, without Stalin?s manipulative skills such as his opportunism and cunning, he would have been unable to take advantage of leftist and rightist faults. Yet his skills alone would not have lead Stalin to political success, also the careful manipulation of the party machine, which ultimately was the key to why Stalin was able to come to power in Russia by 1929. What was essentially was the most significant factor in Stalin?s rise to power was his strong authoritative control and manipulative powers that he held over the Communist party machine. Stalin had achieved four major roles in the party leading up to Lenin?s death in January 1924, from the People?s Commissar for Nationalities in 1917 and eventually achieving Secretary of the Communist Party in 1922. ...read more.

Stalin was able to paint Trotsky as a traitor, as he was threatening the security of the Soviet Union. Stalin?s idea was further strengthened in 1927, after the war scare. Fear of invasion throughout the 1920?s played into Stalin?s hands making Trotsky?s efforts seeming unsubstantial in comparison. Taking Lenin?s plans and improving them further, gaining added support. Lenin?s continuation of the exploitations of the people?s love of Lenin was one of the key factors that assisted him in gaining power. The cult of Lenin was a strong fascination of Russia, and Stalin realised he had to present himself as a successor to the figure who had become a Godly figure in Communist Russia. One could say that Stalin?s careful manipulation of this cult was imperative to his rise to power and was a vital reason why he triumphed in 1929. After Lenin?s death on the 21st of January 1924, Joseph Stalin became ?Chief Mourner? (S.Phillips), personally organising Lenin?s funeral and delivered the speech. Thus increasing his appearance as Lenin?s loyal disciple, the political leader who would carry on Lenin?s work. Stalin also demonstrated his cunning by intentionally sabotaging Trotsky, telling him the wrong date of the funeral. Severely damaging Trotsky?s reputation and political prestige. ...read more.

Zinoviev and Kamenev persuaded the Central Committee not to make Lenin?s political testament common knowledge, they believed that ?Stalin was no real threat to the party? (C.Corin+ T.Fiehn) and wanted Stalin to assist them to defend Trotsky due to Lenin not being as hostile about him in comparison to the rest. He distanced himself from the decision not to read out the testament, unwilling to become involved. This decision is pivotal in the leadership race, as Stalin?s reputation remained intact. He learned quickly from this lucky decision and became power hungry, once he realised that now the leadership was in his grasp. In conclusion, it can be argued that ?machine politics alone did not account for Stalin?s triumph? (Sachem) but it is a huge part of the reason why Stalin was able to complete his ascent to power by 1929. Yet nevertheless, it would be unsophisticated to suggest that one lone factor was the chief skill which catapulted Joseph Stalin to power by 1929. The addition of his political skill, manipulative powers and cunning, makes it clear that after his initial mistakes in the early 1910 where he became to headstrong, Stalin soon realised that the leadership race was in a mess and he can use his skills to overcome weak opposition and finally ascend to power. ...read more.