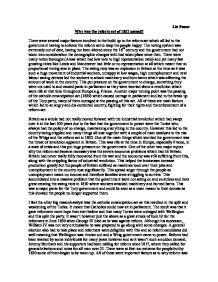 Liz Power Why was the reform act of 1832 passed? There were several major factors involved in the build up to the reform act which all led to the government having to enforce the reform act to keep the people happy. The voting system was extremely out of date, having not been altered since the 18th century and the government had not taken into consideration the demographic changes with had taken place since then. There were many rotten boroughs (Areas which had low vote to high representation ratio) and yet many fast growing cities like Leeds and Manchester had little or no representation at all which meant that no proportional voting was in place. The swing riots was an explosion in Britain at the time as it was such a huge movement of industrial workers, unhappy at low wages, high unemployment and new labour saving devices led the workers to attack machinery and burn barns which was affecting the amount of work in the country. This put pressure on the government to change, something they were not used to and caused panic in parliament as they were worried about a revolution which were rife at that time throughout Europe e.g. France. Another major turning point was the passing of the catholic emancipation act (1829) which caused outrage in parliament and led to the break up of the Tory party, many of them outraged at the passing of this act. ...read more.

This however was never put into force as, after many deliberations, it was defeated in the House of Lords. This caused a public outcry and anger. A significant sign was a black border in the 'Morning Chronicle' as a sign of mourning for the bill, riots and protests followed this, people were very anger at the treatment from the lords. The bill, withdrawn therefore again had to be compromised and this was issued in Dec 1831. It took until March to pass commons easily but lords were still hostile. At this point Lord Grey realised he had to do something and so he tried to create another 50 Whig peers from William IV but he refused and this led to resignation of Lord Grey. I think at this point people were sick of waiting and the excuses put forward by the Lords and again an eruption of riots and protests took place. Here William IV invited Wellington to create a new Tory government by they were inadvertently split and so Grey was asked to return to office amid high agitation. Attwood was calling a boycott paying taxes and one MP wrote "The whole country is in a state little short of insurrection" I believe that this summed up the mood of British citizens at the time. They felt betrayed and hard done by by the house of Lords who still remained hostile and so William realised he now had to act and so he created the required number of Whig peers to get the bill passed. ...read more.

The working class seemed to have an especially hard deal; those who could previously vote majorly lost that right. Also it seemed that government and the monarchy were trying to stop the working class from having a say in the country by leaving big chunks of the population out from voting i.e. labourers and industrial workers. I believe that all of this would have left the working class disappointed and they began to look towards trade unionism so that they had someone to stand up for their rights and beliefs in the workplace and a large number also looked towards Chartism, the more radical reformists to get the reform that they felt they deserved. I feel that the main importance of the act was not what it achieved as this was very little but that it was the first breach in the system and gave people a taste of what they desired, an equal voice in the running of the country. This shocked the Whigs as they thought that the reform would satisfy the population but it purely gave people a taste for more and future problems are therefore inevitable in Britain. I feel that the lack of actual reform within the bill is summed up quite well by M.G.Brook, previously mentioned, "Much the same men continued to run much the same system." Change was hard to come by but the people were ready for a fight to get the equality they demanded, this was no doubt not the end of the reform period for Britain. ...read more.