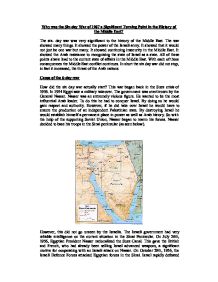 Why was the Six-day War of 1967 a Significant Turning Point in the History of the Middle East?

Why was the Six-day War of 1967 a Significant Turning Point in the History of the Middle East? The six- day war was very significant to the history of the Middle East. The war showed many things. It showed the power of the Israeli army. It showed that it would not just be one war but many. It showed continuing insecurity in the Middle East. It showed the Arab resistance to recognising the state of Israel as a state. All of these points shave lead to the current state of affairs in the Middle East. With each of these consequences the Middle East conflict continues. In short the six day war did not stop, in fact it increased, the threat of the Arab nations. Cause of the 6-day-war How did the six day war actually start? This war began back in the Suez crisis of 1956. In 1954 Egypt saw a military takeover. The government was overthrown by the General Nasser. Nasser was an extremely vicious figure. He wanted to be the most influential Arab leader. To do this he had to conquer Israel. By doing so he would gain respect and authority. However, if he did take over Israel he would have to ensure the production of an independent Palestinian state. By destroying Israel he would establish himself a permanent place in power as well as Arab history. ...read more.

Then there was east Jerusalem, previously an area belonging to the Palestinians, this was taken through pure urban warfare. This gave Israel a religious and physiological advantage over the Arabs, or so they thought. By keeping this eastern site Israel strengthened the Arab resistance to Israel. By taking the area which house one of the single most important mosques in Islam the Israelis fuelled the Islamic terrorist groups with more rage and anger. By doing so this continues the struggle between Israel and terrorism. Due to the taking of this land comes the term occupied territories. Israel had expected to gain the land and so had though of a settlement policy. Had they expected such resistance to their policy is uncertain? Israel has occupied these territories but it has not claimed them as Israel or returned them to their previous owner's this mean they are occupied territories. This means the people of these territories do not have Israeli rights and do not belong to any particular state. Only the Golan Heights and east Jerusalem have been claimed as part of Israel. The remaining three have not, officially, been claimed as part of Israel. This makes them occupied which means that they are under Israeli military rule but Israel does not want the Arab nationals to become Israeli citizens. ...read more.

Another outcome of the war was the Camp David Effect. After the Yom Kippur war the Egyptian general Sadat realised the need for peace and so with the help of the American president, Jimmy Carter, peace was agreed to between the Israeli leader and Sadat but only if the Sinai Peninsular was returned. This was agreed to. This so called idea of land for peace had worked. This is thought of as the stepping stone forward to peace. However the Arabs were furious at Sadat as he had broken the agreement of the 3 NOs and hence was assassinated in 1981 by an army officer. The 6 Day war has a huge significance to the current Arab Israeli situation. The six day war led to many things. Israel had believed that the 6 day war would be the last but they were very mistaken. They did not expect to spend the next 20 years fighting Intifadas and terrorism. They did not expect such agreements such as the 3 Nos. they did not expect to have to fight for their lives everyday. In short they had expected more Arab co-operation than they received. However, through the 6 day war and its consequences the Israeli government realised the potential in such deals as land for peace as with General Sadat. If peace is to be declared and remain in permanent existence then perhaps the land for peace formula is the one to use. ...read more.