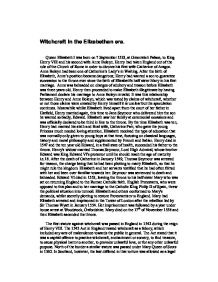 Witchcraft in the Elizabethan era.

Witchcraft in the Elizabethan era. Queen Elizabeth I was born on 7 September 1533, at Greenwich Palace, to King Henry VIII and his second wife Anne Boleyn. Henry had taken England out of the rule of the Church of Rome in order to divorce his first wife Catherine of Aragon. Anne Boleyn had been one of Catherine's Lady's in Waiting. After the birth of Elizabeth, Anne's position became dangerous; Henry had wanted a son to guarantee succession to the throne ever since the birth of Elizabeth's half sister Mary in his first marriage. Anne was beheaded on charges of adultery and treason before Elizabeth was three years old. Henry then proceeded to make Elizabeth illegitimate by having Parliament declare his marriage to Anne Boleyn invalid. It was this relationship between Henry and Anne Boleyn, which was tested by claims of witchcraft, whether or not those claims were created by Henry himself it is unclear but the speculation continues. Meanwhile whilst Elizabeth lived apart from the court of her father in Hatfield, Henry married again, this time to Jane Seymour who delivered him the son he wanted so badly, Edward. Elizabeth saw her family at ceremonial occasions and was officially declared to be third in line to the throne. ...read more.

The Elizabethan Statute of 1563 was very similar in wording to the 1542 Bill in Henry VIII's reign. Protestant England was willing to believe that the Roman Catholics would resort to sorcery and witchcraft to restore the Old Faith. There was widespread suspicion and hostility where witches were concerned. All naturally incurred disasters and misfortunes were attributed to witches. Elizabeth may have had another reason to be seen persecuting witches. Anne Boleyn, her own mother, was widely believed to have been a witch. Her Protestant subjects would not have been enchanted, excuse the pun, by this allegation. Elizabeth's Catholic subjects were being exposed to spiteful propaganda, which attempted to discredit the Protestant queen. She was reputedly as much a witch as her mother. Most derogatory reports about Anne Boleyn came from two hostile sources with vested interests. Eustace Chapuys, Charles V's Imperial Ambassador, attempted to prevent Henry VIII from divorcing Catherine of Aragon. He viewed Anne Boleyn as an evil woman who "used witchcraft to manipulate and control the king." Nicholas Sander, a Catholic priest, worked actively against Queen Elizabeth I. He assured his readers that Anne Boleyn had the monstrous appearance of a witch. He is renown for accusing her of having, "...a tumour on her neck and a sixth finger on her right hand" It is difficult to see how Henry VIII could have fallen in love with such an ugly creature. ...read more.

Then Elizabeth had to face the might of the Spanish Armada in 1588. There were more accusations of witchcraft in Elizabeth's reign than in the whole of the 17th century. In total 445 indictments for witchcraft were heard by the Courts of Assize in Essex, Hertford, Kent, Surrey and Sussex between 1559 and 1603. Only 335 witchcraft cases were heard before the Courts of Assize on the Home Circuit between 1604 and 1698. Both Catholics and Protestants believed that witches were able to fly by night, shape shift, and control the weather. It goes without saying that witches were also accused of killing children, and of injuring humans and animals. After one or two sessions of torture, even the non believers acknowledged that they were able to perform "wondrous" feats. In the end no one knows whether or not witches exist nowadays never mind back in the 16th Century, however it can be established that the accusations were real enough and that the women accused felt the wrath of so called witch hunters and the angry mobs that were prone to follow such characters. What has to be acknowledged is that most of the claims were only made as part of vendetta against Elizabeth by the Catholic's who felt that Elizabeth I was illegitimately holding the throne from Mary Queen of Scots who they saw as the rightful heir to the throne. ...read more.