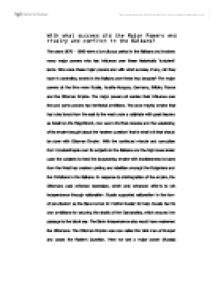 With what success did the Major Powers end rivalry and conflict in the Balkans?

With what success did the Major Powers end rivalry and conflict in the Balkans? The years 1870 - 1890 were a tumultuous period in the Balkans and involved many major powers who had influence over these historically 'turbulent' lands. Who were these major powers and with what success, if any, did they have in controlling events in the Balkans over these two decades? The major powers at the time were Russia, Austria-Hungary, Germany, Britain, France and the Ottoman Empire. The major powers all wanted their influence over this and some powers had territorial ambitions. The once mighty empire that had ruled lands from the east to the west under a caliphate with great leaders as Suleiman the Magnificent, now was in its final decades and the weakening of its empire brought about the 'eastern question' that is what is it that should be done with Ottoman Empire. With the continued misrule and corruption from Constantinople over its subjects in the Balkans and the high taxes levied upon the subjects to feed the burgeoning ...read more.

The lack of reforms made by the Ottomans only exacerbated the climate. The instability now clearly visible in the Balkans showed the differences between the major powers especially the rivalry between Russian and the Austria-Hungarian Empire for reasons cited earlier. The major powers through diplomacy (Andrassy note & Berlin memorandum) pushed for political reforms within the Ottoman Empire but failed. The repression of the Bulgarians by the Ottomans called for the Constantinople conference observed by the major powers. The aim being reformation in the Ottoman Balkans. The conference proved fruitless which provided the Russians a pretext for war, which resulted in victory. The Russians had advanced towards Constantinople with fierce resistance from Osman Pasha at Plevna. After months of resistance, Russia succeeded in controlling the outcome of the situation in the Balkans with its military strategy which ultimately led to the San Stefano treaty. The gains of this treaty was inappropriate in the eyes of the major powers and so this success was short lived as the major powers were reluctant to allow Russia as the main player within the region and preferred a balance. ...read more.

Turkish reforms being absent from the Berlin Congress only created further uprisings. The humiliation of Russia and the gains of Austria Hungary and Britain didn't bode well with Russia especially since they had lost many soldiers in the recent war over the Balkans. This created animosity between Austria Hungary and Russia, which broke the Three Emperors League prompting Bismarck to set up alliances outside of the congress (reinsurance treaty and dual alliance) Further trouble was ahead in 1885 over the Bulgarian crisis as mentioned earlier. With Russia and Austria at loggerheads over the unification this undermined Bismarck's carefully selected network of alliances. The major powers individually had their effort's to control events and also as a grouping in the form of congresses and treaties. The underlying causes of which contributed to future events in the Balkans were never really addressed and the major powers only really postponed the inevitable. No major war occurred for nearly forty years indicating that the main or root problems were repressed until it inevitably erupted decades later. ...read more.