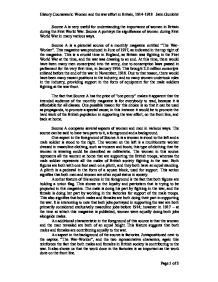 Women and the war effort in Britain

Source A is very useful for understanding the importance of women in Britain during the First World War. Source A portrays the significance of women during First World War in many various ways. Source A is a pictorial source of a monthly magazine entitled "The War-Worker". This magazine was produced in June of 1917, as indicated in the top right of the magazine. This is a crucial time in England, as Britain was fighting in the First World War at the time, and the war was drawing to an end. At this time, there would have been many men conscripted into the army, due to conscription laws passed in parliament for the very first time, in January 1916. This brought 2.3 million conscripts enlisted before the end of the war in November, 1918. Due to that reason, there would have been many vacant positions in the industry, and so many women undertook roles in the industry, providing support in the form of equipment for the male soldiers fighting at the war front. The fact that Source A has the price of "one penny" makes it apparent that the intended audience of the monthly magazine is for everybody to read, because it is affordable for all classes. ...read more.

1914; however in 1917 - at the time at which this magazine is published, women were equally doing both jobs alongside males. An additional characteristic in the foreground of this source is that the woman and the man revealed are both of an equal height. This feature suggests that both males and females are contributing equally to the war. An aspect in the background of the source is factories. Juxtapositioned next to the caption "The War-Worker", and the two representative characters, again this reinforces the fact that both males and females in British society is contributing to the war. It also shows us that the work done in the factories is as important as the work done on the front line. Source A also has a list of contents showing what will be covered in the magazine. It is interesting to make a note of the fact that all the content in the magazine has many pages covering the role of women in the war. Also, the first page of this magazine starts with "A message from the Archbishop of Canterbury", who was in support of women's suffrage and other women rights. ...read more.

This way the source suggests that the men are only half-hearted in the war to defend the nation, but the other side of men want to go to war for the feeling of euphoria, and the rush of adrenaline, while women on the other hand are fully focused on defending Britain. Despite use usefulness of Source A, it also has its own limitations. Because this source's purpose is generally for propaganda, it may not reflect the entire truth of the situation, such as the arguments shown the magazine's front cover. I think that the reader is meant to think by looking at the front cover of the magazine that women should keep up the war effort, and that men and women are enjoying the equal status given to them. In conclusion, I think that Source A is very useful as evidence about the importance of women in the First World War because it shows that you cannot have an efficient functioning society without the roles of women participating equally. I think that women are important in society because without them, things would all be single minded and performed less economically and efficiently. ?? ?? ?? ?? History Coursework: Women and the war effort in Britain, 1914-1918 Jatin Gumbhir Page 1 of 2 ...read more.