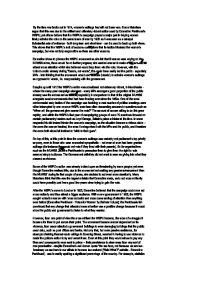 WSPU. By the time war broke out in 1914, women's suffrage had still not been won. Some historians argue that this was due to the militant and ultimately violent action used by Emmeline Pankhurst's WSPU;

By the time war broke out in 1914, women's suffrage had still not been won. Some historians argue that this was due to the militant and ultimately violent action used by Emmeline Pankhurst's WSPU; yet others believe that the WSPU's campaign played a major part in helping women finally acheive the vote on the same terms of men by 1928 as it was seen as a catalyst. Substantial sets of evidence - both long-term and short-term - can be used to back up both views. This shows that the WSPU's lack of success could prove that its tactics hindered the women's campaign, but was not fully responsible as there are other reasons. Emmeline chose to pioneer the WSPU movement as she felt that if women were relying on the NUWSS alone, there would be no further progress; she wanted women to make a bigger stand to attract more attention which she believed would help them win the vote. However, with the Union's motto already stating "Deeds, not words", this could have easily led the public - especially MPs - into thinking that the movement would use violence ('deeds') to acheive women's suffrage as opposed to 'words', i.e. compromising with the government. Despite up until 1912 the WSPU's action was considered not extremely violent, in Manchester - where the many-year campaign stemmed - many MPs amongst a good proportion of the public already saw the movement as militant, especially in comparison to that of the original NUWSS alongside smaller movements that had been forming ever since the 1860s. ...read more.

Alongside this, Sylvia furthermore had political views that were connected more with the NUWSS: '..in contrast to them she retained her interest in the labour movement.' [Sylvia Pankhurst, Wikipedia]. If the Pankhurst family could not even agree, then the people who witnessed this would be inclined not to. I feel that the period between 1912-14 showed the bitterness between the 'suffragettes' and the government at its height as a result of the WSPU's behaviour. Even though Emmeline Pankhurst had said that she 'allow(ed) my members to act...on their own free will' ['Votes for Women' Belinda Hollyer], members became so dedicated to Emmeline's cause that they became martyrs. This period would have been all the more ideal for the members of the WSPU to reduce its militant tacticts - for instance arson attacks - as, although the government had still not granted women's suffrage, evidence could suggest that they were somewhat more willing to compromise. For example, when martyrs refused to eat or drink when send to prison, 'the Cat and Mouse Act' was introduced to stop the perpetual force-feeding and allow members to recover. Nevertheless, the women were still willing to die for their cause, which not only made them look hysterical, but also ironically made them look even weaker than if they had simply not have been arrested in the first place. Lastly, although the WSPU did not just involve violence in their campaigns at first - for instance processions - it did attract large crowds, but this did not necessarily imply that they were supporters, or even sympathetic! ...read more.

It wasn't until a good few months into 1915 that a meeting was held for he and Emmeline to discuss the WSPU's action - progress was very slow. Even Queen Victoria was against the WSPU's notion, stating that women are '...what God intended, a helpmate for man, but with totally different duties and vocations.' It is believed that Queen Victoria never became in favour of the movement. In conclusion, after weighing up both sides of the argument, I believe that the perception that the militancy of the WSPU resulted in a greater hinderance to the women's struggle to gain the vote by 1914 to quite an extent. Indeed, 'militancy attracted publicity' [B. Whitefield, 'The Extension of the Franchice]; however, many other historians such as 'Liddington suggests that the militant acts 'only attracted public interest, never mass support'' [H.L. Smith, 'The British Women's Suffrage Campaign']. This is a key point to consider when regarding the impact of the WSPU's militancy during that period. Over 1,000 'suffragettes' were imprisoned in relation to the WSPU's demand for the extension on women's franchise. Even though on the one hand it attracted some sympathy, statistics like these prove that women were living up to their stereotype, and thus secured a justified argument that women belong in "seperate spheres": the men connected with politics, work and war; the women in their domestic sphere to raise their children and support their husbands. This hugely contentious issue is still as controversial as ever when debating whether the main reason for the WSPU's lack of success by 1914 was because of the movement's militancy. ...read more.