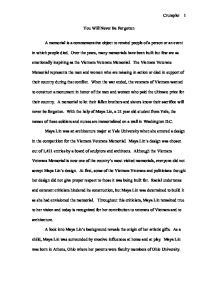 You Will Never Be Forgotten

You Will Never Be Forgotten A memorial is a commemorative object to remind people of a person or an event in which people died. Over the years, many memorials have been built but few are as emotionally inspiring as the Vietnam Veterans Memorial. The Vietnam Veterans Memorial represents the men and women who are missing in action or died in support of their country during that conflict. When the war ended, the veterans of Vietnam wanted to construct a monument in honor of the men and women who paid the ultimate price for their country. A memorial to let their fallen brothers and sisters know their sacrifice will never be forgotten. With the help of Maya Lin, a 21 year old student from Yale, the names of these soldiers and nurses are immortalized on a wall in Washington D.C. Maya Lin was an architecture major at Yale University when she entered a design in the competition for the Vietnam Veterans Memorial. Maya Lin's design was chosen out of 1,421 entries by a board of sculptors and architects. Although the Vietnam Veterans Memorial is now one of the country's most visited memorials, everyone did not accept Maya Lin's design. ...read more.

Robert Doubek, Vietnam Veteran and affiliate of the VVMF, stated, "Some people felt that we ourselves should constitute the jury; however, I know I didn't know anything about art design and the people around me knew even less." As a result, the panel of judges chosen consisted of two architects, two landscape architects, two sculptors, and a humanist. The competition attracted many applicants; many were from well-established architects and architecture firms but only one stood out from the rest. Grady Clay, jury chairman, recalled eliminating 400 on the first day and as they dwindled down to the last 200 they would, as a group, inspect each entry. At first, Clay said he did not choose Maya as the winner but later said, "The longer I looked, the more I was convinced it was unquestionably the one." Out of 1,421 contestants Maya's design was chosen as the winner in the spring of 1981. ("Maya Lin: A Strong Clear Vision") Maya Lin knew her design had to symbolize the losses during the Vietnam War and be certain that she understood what this memorial was going to represent to the veterans. To get an idea of how the dead have been honored throughout history, Maya studied art from other cultures and different eras. ...read more.

Not only can people remember those that have been lost but also reflect and heal their own scars from the war. (Howe) Despite the continual controversy to stop the construction of her design, Maya Lin fabricated a monument far beyond anyone's expectations. Maya Lin, as an architecture student, gained the attention of our nation with her design of the Vietnam Veterans Memorial. Most veterans saw her memorial for what it was, homage to the men and women of the Vietnam War. But a small majority of veterans, represented by Tom Carhart, believed Maya's design was a "black scar" hidden below ground as if in shame. ("Maya Lin: A Strong Clear Vision") An agreement was made to add a statue and a flag to Maya's design to appease the divergent group. Upon completion of the memorial, it soon became one of the most embraced monuments in the world. Americans and visitors from all over the world can come and see this testament to the sacrifice and endurance of Americans. In an acceptance speech for her Ph.D in architecture, Maya Lin said that we as individuals remain on this earth for only a short time but it's what we do that leaves a lasting impression. Without a doubt, Maya Lin and the names of those inscribed on the "Wall" will never be forgotten. ...read more.