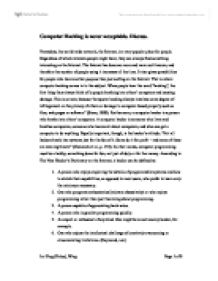 Computer Hacking is never acceptable. Discuss. Nowadays, the world-wide network, the Internet, is a very popular place for people. Regardless of which interests people might have, they can always find something interesting on the Internet. The Internet has become more and more well-known, and therefore the number of people using it increases all the time. It also gives possibilities for people who have another purpose than just surfing on the Internet. That is where computer hacking comes in to the subject. When people hear the word "hacking", the first thing they always think of is people breaking into others' computers and causing damage. This is correct, because "computer hacking always involves some degree of infringement on the privacy of others or damage to computer-based property such as files, web pages or software" (Stone, 1999). Furthermore, a computer hacker is a person who breaks into others' computers. A computer hacker is someone who lives and breathes computers, someone who knows all about computers, and who can get a computer to do anything. Equally important, though, is the hacker's attitude. "Not all hackers break into systems just for the fun of it. Some do it for profit - and some of these are even legitimate" (Cheswick et al., p. 132). ...read more.

the caller said, "This is Eduardo in the Billing Department. I've got a lady on hold, she's a secretary in the executive offices that works for one of the vice presidents, and she's asking for some information and I can't use my computer. I got an email from this girl in Human Resources that said `ILOVEYOU,' and when I opened the attachment, I couldn't use my machine any more. A virus. I got caught by a stupid virus. Anyways, could you look up some customer information for me?" "Sure," Janie answered. "It crashed your computer? That's terrible." "Yeah." "How can I help?" Janie asked. Here the attacker called on information from his advance research to make himself sound authentic. He had learned that the information he wanted was restored in something called the Customer Billing Information System, and he had found out how employees referred to the system. He asked, "Can you bring up an account on CBIS?" "Yes, what's the account number?" "I don't have the number; I need you to bring it up by name." "Okay, what's the name?" "It's Heather Marning." He spelled the name, and Janie typed it in. "Okay, I have it up." "Great. Is the account current?" "Uh huh, it's current." "What's the account number?" ...read more.