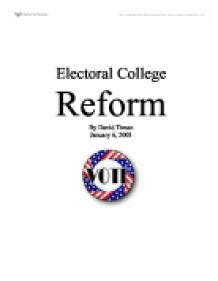 Electoral College Reform By David Timan January 6, 2003 At one time, it was impractical for the People to vote directly for their President, but times have changed. The People of the United States of America are now left with the Electoral College, an ineffective and at times obstructive system of electing their president. I propose that the obsolete Electoral College be abandoned and that a more democratic popular vote system be used. The need for such a change is very evident when one examines the possibility in the system for the most popular candidate to lose, the ridiculous nature of the congress choosing the President in a case of no majority and the unnecessary complexity of the system. The possibility for the Presidential Candidate with the majority of the popular vote to loose an election is ever present in this ridiculous system. Three times in American history, democracy has been defeated in this way by the Electoral College. ...read more.

This can be done countless ways without the existing governing body getting their biased hands on the issue3. For example, voters could be given four votes to be given to the candidates they choose. The votes could all be given to one candidate or spread however the voter wanted. This way when all votes are counted the first past the post could be declared the choice of the majority of the people, whether first or second or other choice. This would prevent an upset of the delicate balance of powers found in the American Federal Government. This happened once in 1824 when Andrew Jackson, who held the most Electoral College votes and the most popular vote, lost the election to John Q. Adams since the House voted in favour of the later candidate. John H. Eaton, the campaign manager for Andrew Jackson made this statement at the time, "Look to the city of Washington. ...read more.

The people of the American working class are now and have been able for quite some time to decide for themselves who the most worthy presidential candidate is. It is quite evident that the current system needs to be changed, however, the question arises as to whether or not it will be changed. If this system has been obsolete for nearly six generations and has still not had a major proposal put before Congress, is it likely that any changes will be made in the near future or is it more likely that the liberty loving Americans will forego on this one, and focus instead on fighting wars and making money? True, several articles have been written on the subject of reform but stories of dictators with biological weapons and rising oil prices draw far more attention than the need for a new electoral system. Besides, the current President was elected through one of the system's loopholes, and seems to prefer war to having attention drawn to this or the many other domestic problems that plague the United States today. ...read more.