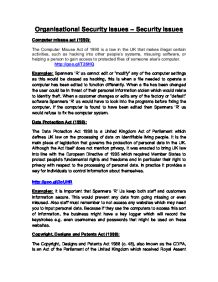 Organisational Security Issues - Security Issues Computer misuse act (1990): The Computer Misuse Act of 1990 is a law in the UK that makes illegal certain activities, such as hacking into other people's systems, misusing software, or helping a person to gain access to protected files of someone else's computer. http://goo.gl/T26HQ Examples: Spanners 'R' us cannot edit or "modify" any of the computer settings as this would be classed as hacking, this is when a file needed to operate a computer has been edited to function differently. When a file has been changed the user could be in threat of their personal information stolen which would relate to identity theft. When a customer changes or edits any of the factory or "default" software Spanners 'R' us would have to look into the programs before fixing the computer, if the computer is found to have been edited then Spanners 'R' us would refuse to fix the computer system. Data Protection Act (1998): The Data Protection Act 1998 is a United Kingdom Act of Parliament which defines UK law on the processing of data on identifiable living people. ...read more.

Copyright, Designs and Patents Act (1988): The Copyright, Designs and Patents Act 1988 (c. 48), also known as the CDPA, is an Act of the Parliament of the United Kingdom which received Royal Assent on 15 November 1988. It reformulates almost completely the statutory basis of copyright law (including performing rights) in the United Kingdom, which had, until then, been governed by the Copyright Act 1956 (c. 74). It also creates an unregistered design right, and contains a number of modifications to the law of the United Kingdom on Registered Designs and patents. http://goo.gl/8A75F Principle of the Act: Copyright gives the creator of the product / media to have rights on what they have created. The copyright law stops anyone from publishing the product as a copied version, for example: an album would have a copyright law so it is not copied and sold on as in this case the person who is selling a copy of the original product is getting the money and not the artist of the song. ...read more.

Shareware: This license is just like freeware but you would be expected to pay a fee for the product to the creator. Open source: This license allows the user of the software to edit or tweak the software as well as suggest improvements (beta software's) Educational: This license would be provided with a discount as the software would be used for educational purposes. Students: This license would only be provided to students. (Microsoft office 2011) Freedom of information act (2000): The Freedom of Information Act 2000 is an Act of the parliament that creates a public "right of access" to information held by public authorities. It is the implementation of freedom of information legislation in the United Kingdom on a national level. http://goo.gl/3Dpe3 Principle of the Act: Staff at Spanners 'R' us cannot be asking about the customer's medical history as not only is this information confidential but also is irrelevant when purchasing a computer system or any other electrical product. Customers of Spanners 'R' us can't ask for information on staff as to where they live or what their contact details are, however they may ask when that particular member of staff's working hours are. ...read more.