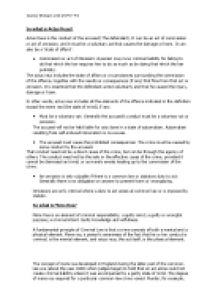 ﻿Connor McCann Unit 24 P1 + P2 So what is Actus Reus? Actus Reus is the conduct of the accused (The defendant). It can be an act of commission or act of omission, and it must be a voluntary act that causes the damage or harm. It can also be a "state of affairs". 1. Commission or act of Omission: A person may incur criminal liability for failing to do that which the law requires him to do as much as by doing that which the law prohibits. The actus reus includes the state of affairs or circumstances surrounding the commission of the offence, together with the results or consequences (if any) ...read more.

1. An omission is only culpable if there is a common law or statutory duty to act: Generally there is no obligation on anyone to prevent harm or wrongdoing. Omissions are only criminal where a duty to act arises at common law or is imposed by statute. So what is Mens Rea? Mens Rea is an element of criminal responsibility, a guilty mind; a guilty or wrongful purpose; a criminal intent. Guilty knowledge and wilfulness. A fundamental principle of Criminal Law is that a crime consists of both a mental and a physical element. Mens rea, a person's awareness of the fact that his or her conduct is criminal, is the mental element, and actus reus, the act itself, is the physical element. ...read more.

Sometimes a statute creates criminal liability for the commission or omission of a particular act without designating a mens rea. These are called Strict Liability statutes. If such a statute is construed to purposely omit criminal intent, a person who commits the crime may be guilty even though he or she had no knowledge that his or her act was criminal and had no thought of committing a crime. All that is required under such statutes is that the act itself is voluntary, since involuntary acts are not criminal. Occasionally mens rea is used synonymously with the words general intent, although general intent is more commonly used to describe criminal liability when a defendant does not intend to bring about a particular result. Specific Intent, another term related to mens rea, describes a particular state of mind above and beyond what is generally required. ...read more.