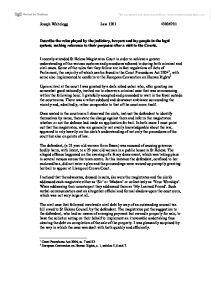 Describe the roles played by the judiciary, lawyers and lay people in the legal system; making reference to their purposes after a visit to the Courts. I recently attended St Helens Magistrates Court in order to achieve a greater understanding of the various customs and procedures adhered to during both criminal and civil cases. Some of the rules that they follow are in fact regulations of Acts of Parliament, the majority of which can be found in the Court Procedures Act 20041, with some also implemented to conform to the European Convention on Human Rights2 Upon arrival at the court I was greeted by a dark robed usher who, after greeting me somewhat good-naturedly, invited me to observe a criminal case that was commencing within the following hour. ...read more.

was accused of causing grievous bodily harm, with intent, to a 23 year old woman in a public house in St Helens. The alleged offence happened on the evening of a fancy dress event, which was taking place in several venues across the town centre. In this instance the defendant, confined to her enclosed box, did not enter a plea and the proceedings were wound up promptly granting her bail to appear at Liverpool Crown Court. I noticed that the advocates, dressed in suits, (as were the magistrates and the clerk) addressed each magistrate either as 'Sir' or 'Madam' or collectively as 'Your Worships'. When addressing their counterpart they addressed them as 'My Learned Friend'. ...read more.

In the civil case, both the magistrates and the clerk seemed to be considerably more relaxed than those in the criminal case, who seemed much more severe. I believe that this goes a long way to supporting the widely regarded notion that, since the establishment of the Civil Procedure Rules during the reform of 1999 following Lord Woolf's 'Access to Justice'4 report, judges in civil cases are far more comfortable in being able to take positive control of the proceedings and manage the case in a fair and tenable manner for both parties involved. On reflection, before my visit I hadn't considered that Magistrates were merely ordinary members of the public, and although it did not appear that they had difficult decisions to make, they nevertheless produced, in my opinion, sound judgements. ...read more.