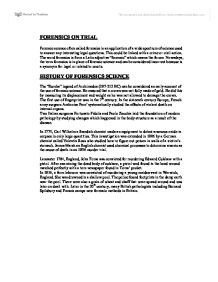 FORENSICS ON TRIAL Forensic science often called forensics is an application of a wide spectrum of science used to answer any interesting legal questions. This could be linked with a crime or civil action. The word forensics is from a Latin adjective "forensic" which means the forum. Nowadays, the term forensics is in place of forensic science and can be considered incorrect because is a synonym for legal or related to courts. HISTORY OF FORENSICS SCIENCE The "Eureka" legend of Archimedes (287-212 BC) can be considered an early account of the use of forensic science. He ensured that a crown was not fully made of gold. He did this by measuring its displacement and weight as he was not allowed to damage the crown. The first use of fingerprint was in the 7th century. In the sixteenth century Europe, French army surgeon Ambroise Pere' systematically studied the effects of violent death on internal organs. Two Italian surgeons Fortunato Fidelis and Paolo Zacchia laid the foundation of modern pathology by studying changes which happened in the body structure as a result of the disease. ...read more.

It is also possible to determine if the body was moved after death. Forensic geology Deals with trace evidence in the form of soils, minerals and petroleum. Forensic interviewing Is a way of communicating to elicit information and evidence. Forensic meteorology Is a site specific analysis of past weather conditions for a point of loss. Forensic odontology Is the study of uniqueness of dentition well known as study of teeth. Forensic pathology Is a field in which the principles of medicine and pathology are applied to determine a cause of death or injury in the context of a legal injury. Forensic psychology Is the study of individual mind using forensic methods. It usually determines the circumstances behind a criminal behaviour. Forensic toxicology This is the study of effect of drugs and poisons on or in human body. FORENSIC SCIENCE IN FICTION Sherlock Holmes, the fictional character created by Sir Arthur Conan Doyle produced from 1887 to19 used forensic science as one of his methods of investigating. Years later, the comic strip Dick Tracy also featured a detective using a considerable number of forensic methods. Perry Mason, the defence attorney sometimes used forensic techniques both in novels and television series. ...read more.

some specific criticisims have been accepted by the leaders of the fingerprint community to provide an incentive to improve training and procedures. Glenn Langenburg, a forensic scientist and also a latent print examiner has written an article which responds to all academic critics. Criticism Although experts are very comfortable relying on their instincts, things do not always work out for them. for example, in the popular analysis, comparison, evaluation and verification for fingerprint identification, the verification stage by which the second examiner looks at the original examiner may increase the how consistent the assessments are. A natural question is being asked about how well fingerprint examiners perform. In 1995, the collaborative testing service (CTS) administered a test that was made and assembled by the International Association for identification (IAI). The results were very bad. Four cards of suspectswith prints of all ten fingers were provided together with seven latents. Out of 156 people who took the test, only 68 correctly classified all seven latents. Defense fingerprints obtained at a crime scene, or on items of evidence from a crime can be used in forensic science to catch suspects, victims or other people who touched a surface. fingerprint identification became an important system within police agencies in the late stages of the 19th century. ...read more.