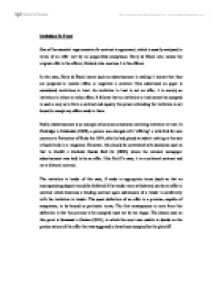 Invitation To Treat One of the essential requirements of a contract is agreement, which is usually analysed in terms of an offer met by an unqualified acceptance. Hairy & Black who makes the original offer is the offeror; Richard who receives it is the offeree. In this case, Hariy & Black inserts such an advertisement is making it known that they are prepared to receive offers or negotiate a contract. Item advertised on paper is considered invitations to treat. An invitation to treat is not an offer, it is merely an invitation to others to make offers. It follows that an invitation to treat cannot be accepted in such a way as to form a contract and equally the person extending the invitation is not bound to accept any offers made to them. Public Advertisement is an example of common situations involving invitation to treat. In Partridge v Crittenden (1968), a person was charged with 'offering' a wild bird for sale contrary to Protection of Birds Act 1954, after he had placed an advert relating to the sale of such birds in a magazine. However, this should be contrasted with decisions such as that in Carlill v Carbolic Smoke Ball Co (1893), where the relevant newspaper advertisement was held to be an offer. ...read more.

Within six weeks, he withdrew his offer, which the plaintiff then attempted to accept anyway. It was held that the defendant could withdraw his offer at any time before acceptance, regardless of the stipulated six weeks. The point of the law is that revocation of an offer must be communicated prior to acceptance. Conclusion Over the years it has been established that generally advertisements will be treated as an I.T.T and not obligations to enter into a binding agreement. (Partridge V Crittenden [1968] 1 W.L.R 1204) These advertisements are usually for goods that are for sale and can appear in many places including Newspapers, Catalogues, Periodicals and Magazines, etc. However there are certain situations where an advertisement can be an offer and not just an I.T.T. (Carlill V Carbolic Smoke Company LTD [1893] 2 Q.B 49) the courts have shown that for an advertisement to be seen as an offer then it has to be very specific and detailed. In this case there were other implications, for example no deposit was placed in a bank account as a show of good faith, this highlighted the validity of the offer. So the more specific an advertisement the more likely it is to be seen as an offer. ...read more.

If an agreement is illegal, neither party can sue the other for breach of contract nor recover for any performance rendered. If the parties are found in equal fault, the court will leave them where it found them, providing a remedy to neither. As Lord Mansfield wrote in a 1775 decision, "No Court will lend its aid to a man who founds his cause of action upon an immoral or an illegal act." If one of the parties to an illegal agreement is ignorant of the facts making the agreement illegal, and the agreement appears to be an ordinary agreement, the courts may permit the ignorant party to sue the other for damages. Illegality of any part of an agreement is ordinarily held to make the entire agreement void and unenforceable. However, it may be possible through terms severing the legal and illegal portions to secure partial recovery. If a contract provided for delivery of legal and illegal goods, and they were priced separately, the seller may be able to collect for the legal goods. The court may view the situation as if there were two contracts. The illegal contract would be void but the legal contract would not be void. Conclusion As it is an illegal contract from the very beginning that the entire agreement is void and unenforceable, and Peter is innocent as well. It is not reasonable from Peter to sue Mary for the damage ...read more.