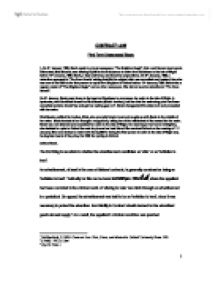 Contract law - Advise Sarah - The first thing to ascertain is whether the advertisement constitutes an 'offer' or an 'invitation to treat'.

CONTRACT LAW First Term Unassessed Essay 1. On 2nd January 1999, Sarah reads in a local newspaper, "The Brighton Bugle", that a well known local sports enthusiast, Mick Muscle, was offering �5,000 to the first person to swim from Southsea to the Isle of Wight before 10th January, 1999. Sarah, a keen swimmer, set about her preparations. On 6th January, 1999, a retraction appeared in "The Hove Herald' stating that Mick's original offer was cancelled and, instead, the prize was now to be �500 to the first person to cycle from Brighton to Oxford before 12th January, 1999. Sarah was a regular reader of "The Brighton Bugle" and no other newspaper. She did not see the retraction in "The Hove Herald". On 9th January, Sarah went down to the beach at Southsea to commence her swim to the Isle of Wight. A bystander, who identified himself as Rick Muscle (Mick's brother), told her that the swimming prize had been cancelled and she should "go and get her cycling gear on". Sarah disregarded this statement and proceeded with her swim. Rick Muscle notified his brother, Mick, who promptly hired a boat and caught up with Sarah in the middle of her swim. Mick shouted at her through a megaphone, telling her of the withdrawal of the reward for the swim. Sarah was not deterred and completed her swim to the Isle of Wight. ...read more.

of the Principles of European Contract Law, and as illustrated in the case of Shuey v United States.10 In this case there had been a notice published offering a reward for information which would lead to the capture of a criminal. Seven months later another notice was published revoking the offer. The plaintiff 'discovered the whereabouts of the criminal'11 the following year and notified the authorities with the intention of claiming the reward, as he had been unaware of the revocation of the offer. It was held that he was not entitled to the reward. The fact that he was not aware of the revocation was held to be irrelevant, since 'it was withdrawn through the same channel through which it was made'12 and he 'should have known that it could be revoked in the manner in which it was made'.13 A second attempt was made to revoke the offer, which clearly indicates that 'reasonable steps were taken' as in Shuey, by Mick arriving at the beach and informing Sarah that the swimming competition had been called off. The general rule is that revocation need not be communicated by the offeree, but may be made by a reliable third party, as in the case of Dickinson v Dodds14. In this case the defendant, Mr Dodds, wrote to the plaintiff, Mr Dickinson, agreeing to sell him his house, and added that the offer would be held over for two days. ...read more.