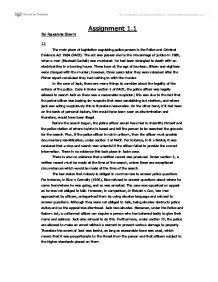 Assignment 1.1 By Roxanne Slevin 1) The main piece of legislation regulating police powers is the Police and Criminal Evidence Act 1984 (PACE). The act was passed due to the miscarriage of justice in 1980, when a man (Maxwell Confait) was murdered. He had been strangled to death with an electrical flex in a burning house. Three boys at the age of fourteen, fifteen and eighteen were charged with the murder; however, three years later they were released after the Fisher report concluded they had nothing to with the murder. In the case of Jack, there are many things to consider about the legality of the actions of the police. Code A Under section 1 of PACE, the police officer was legally allowed to search Jack as there was a reasonable suspicion; this was due to the fact that the patrol officer was looking for suspects that were vandalising bus shelters, and where jack was acting suspiciously this is therefore reasonable. On the other hand, if it had been on the basis of personal factors, this would have been seen as discrimination and therefore, would have been illegal. ...read more.

2) If a person is granted bail, this means that a person accused, convicted or under arrest may be released under a duty to attend court or the police station at a given time. There are many Acts governing bail, this includes: Bail Act 1976 contains the criteria for granting/refusing bail. Criminal Justice and Court Act 2000 questions whether the defendant has ever misused drugs. Criminal Justice Act 2003 states a refusal for bail is law, if the drug abuser refuses a treatment. The Crime and Disorder Act - if a person has a previous conviction of an indictable crime, then they cannot be granted bail unless there is an exceptional reason. Plus, there is the Police and Justice Act 2006, which increases the range of conditions that can be imposed when granting bail, Criminal Justice Act 2003 gives the police the right to grant bail at the place of arrest (known as street bail) and Criminal Justice and immigration Act allows half the time spent on bail, with a tagged curfew, to be deducted from sentenced. After an arrest, PACE provides that the suspect should be taken to the police station after an arrest, although this may be delayed if their presence else where is necessary for an immediate investigation under section 30. ...read more.

Bail can be subject to conditions, such as that the accused must obtain legal advice before their next court appearance or that the third party gives a security; where people guarantee to pay into court a fixed fee if the bailed person absconds. Or the defendant has to report to the local police station at regular times. A residence order is where the defendant has to stay at a certain address and also restrictions can be placed, such as a curfew, or a ban on speaking to a certain witness or even electric tagging. Perhaps in Jacks case the most appropriate conditions are to restrict him to a curfew, so that he is not out late and being abusive towards people. Also, a surety may be used, so try and encourage him to turn up to court - his lack of cooperation during the search could portray a lack of cooperation in court. Finally, he may also have to report to the police station, to make sure things are ok with him, and to make sure he is not getting into any more trouble. It is unlikely that they will give him a residence order as he would be living with his parents still, and also electric tagging is too extreme in this circumstance. ...read more.

A good essay, outlining the key provisions of PACE.