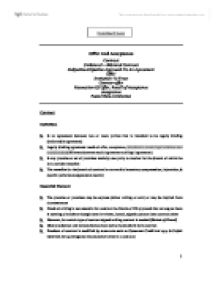 Contract Law Offer And Acceptance Contract Unilateral - Bilateral Contract Subjective-Objective Approach To An Agreement Offer Invitation To Treat Counter-offer Revocation Of Offer, Recall of Acceptance Acceptance Postal Rule-Limitation Contract Definition * Is an agreement between two or more parties that is intended to be legally binding (enforceable agreement) * Legally binding agreement needs of offer, acceptance, intention to create legal relations and consideration(difference between social agreement and legal agreement) * Is any promise or set of promises made by one party to another for the breach of which the law provides remedies * The remedies for the breach of contract is an award of monetary compensation, injunction, & specific performance(quantum meruit) Essential Element * The promise or promises may be express (either writing or oral) or may be implied from circumstances * Needs of writing is not essential for contract the Courts of US approved that as long as there is meeting of minds as though there is written, formal, signed contract then contract exists * However, for certain type of contract signed writing contract is needed (Statute of Fraud) * Mass production and nationalisation have led to the standard form contract * Freedom of contract is modified by some acts such as Consumer Credit Act 1974 & Unfair Contract Act 1977(regulate the extend of terms in a contract) * Law sometimes implies some terms into contract to observe certain standard of behaviour s.12-15 Sale Of Goods Act 1979 (terms such as the fitness, title, and quality of goods into the sale of goods contract) Determination Of Agreement * Is determined objectively not subjectively * Contract is the outcome of 'consenting minds' 'consensus ad idem' * The older theories ' contract requires the party to have a true meeting of minds between the parties. * This is unsatisfactory , as other parties have no means of knowing their counterparts' undisclosed intentions or understanding * But outcome of 'consenting minds' also misleading as parties are judged by what they have said, written, or done, and not by what in their mind. ...read more.

The proclamation was not limited in terms to any specific period. On 24 November 1865, the President issued an order revoking the offer of the reward. In 1866 the claimant discovered and identified one of the named persons, and informed the authorities. He was, at all times, unaware that the offer of the reward had been revoked. The claimant's petition was dismissed. It was held that the offer of a reward was revoked on 24 November and notice of the revocation was published. It was withdrawn through the same channel in which it was made. It was immaterial that the claimant was ignorant of the withdrawal. The offer of the reward not having been made to him directly, but by means of a published proclamation, he should have known that it could be revoked in the manner in which it was made. * Unilateral offer for an act/performance can not be revoked after the act is done Errington v Errington and Woods (1952) A father bought a house on mortgage for his son and daughter-in-law and promised them that if they paid off the mortgage, they could have the house. They began to do this but before they had finished paying, the father died. His widow claimed the house. The daughter-in-law was granted possession of the house by the trial judge and the Court of Appeal. Denning LJ stated: "The father's promise was a unilateral contract - a promise of the house in return for their act of paying the instalments. It could not be revoked by him once the couple entered on performance of the act, but it would cease to bind him if they left it incomplete and unperformed, which they have not done. If that was the position during the father's lifetime, so it must be after his death. If the daughter-in-law continues to pay all the building society instalments, the couple will be entitled to have the property transferred to them as soon as the mortgage is paid off; but ...read more.

* Acceptance then takes the forms of the submission of a tender * Problems arises when tenders is submitted in the form of "referential bid" Harvela Investments Ltd v Royal Trust Co. of Canada (C.I) Ltd 1986 An invitation for the submission of "offers" for the purchase of shares was addressed to two persons; it stated the prospective sellers bound themselves to accept the "highest offer". One of the person to whom the invitation was addressed to made a bid of a fixed sum while the other submitted a "referential bid" undertaking to pay either a fixed sum or a specified amount in excess of the bid made by other, whichever was the highest amount. It was held that the submission of the "referential bid" is ineffective and the contract is concluded with the claimant. The House of Lords stressed that the bid were, by the terms of the invitation, to be confidential. * In this circumstance, the object of the invitation, which was ascertain the highest amount which each of the persons to whom it was addressed was willing to pay, it would have been defeated by allowing it to be accepted by a "referential bid" 1 Moran v University College Salford - clerical mistake 2 Gunthing v Lynn 1831 3 Gibbons v Proctor 1891 4 Carllil v Carbolic Smoke Ball Co. 1893 5 Patridge v Crittenden 1968 6 Harris v Nickerson 7 Rooke v Dawson 1895 8 Grainger & Sons v Gough 9 Thronton v Shoe Lane Parking 1971 10 Chaperton v Barry U.D.C. 11 Esso Petroleum v Commissioner of Customs & Excise 1976 12 Warlow v Harrison 13 Denton v G.N.Ry 1856 14 Jackson v Turquand 1869 15 Reynolds v Atherton 1921 16 Kennedy v Thomassen 1929 17 O.T.M. Ltd v Hydranautics 1981 18 The Frotanorte 1996 19 The Good Helmsman 1981 20 Jayaar Impex Ltd v Toaken Group Ltd 1996 21 The Saronikos 1986 22 The Kurnia Dewi 1997 23 Brogden v Metropolitan Railway 1877 24 For Exception Vienna Convention Art 19(2) 25 Harvela Investments Ltd v Royal Trust Co. of Canada (C.I) Ltd 1986 1 ...read more.

Good summary of the law, though the format would not work well in the examination context.

More detail on intention and certainty would improve this essay, as would a more concise approach to case summaries.