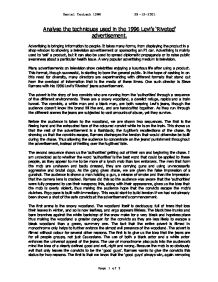 Analyse the techniques used in the 1996 Levi's 'Riveted' advertisement. Advertising is bringing information to people. It takes many forms, from displaying the product in a shop window to showing a television advertisement or sponsoring an F1 car. Advertising is mainly used to 'sell' a product, but it can also be used to spread diplomatic propaganda or to raise public awareness about a particular health issue. A very popular advertising medium is television. Many advertisements on television show celebrities enjoying a luxurious life after using a product. This format, though successful, is starting to bore the general public. In the hope of cashing in on this need for diversity, many directors are experimenting with different formats that stand out from the overload of information that is the media of these times. One such director is Steve Ramses with his 1996 Levi's 'Riveted' jeans advertisement. The advert is the story of two convicts who are running from the 'authorities' through a sequence of five different environments. These are a snowy woodland, a derelict refuge, rapids and a train tunnel. The convicts, a white man and a black man, are both wearing Levi's jeans, though the audience doesn't know the brand till the end, and are handcuffed together. As they run through the different scenes the jeans are subjected to vast amounts of abuse, yet they survive. ...read more.

The handcuffs that chain them together ensure that they either both survive or both get caught. During the time that the black man was down, his jeans dragged in the snow. This sequence is taken in slow motion so that the jeans have to endure the stress for longer in the audience's mind. The jeans ability to survive even this prolonged suffering means that they are very strong and durable. Ergo the audience starts to want the jeans because if they can survive this punishment, they should be able to survive anything that the average person can put them through. A derelict shack is the jeans' next challenge. As the fugitives approach what appears to be a place where they can find refuge the pace of the pursuit increases. To the front of the hut are several mean looking objects. These include a rusting chain in the snow and an axe with its head in a short upturned log. Both of these ensure that the atmosphere becomes quite menacing. Just as the convicts are about to enter the hut, a violent, black dog appears in the doorway. We see several extreme close up shots of the animals gnashing teeth, all of which are taken from a low camera angle. The low camera angle puts the audience beneath the dog, Ramses wants the audience there so that the dog has power over us. ...read more.

Here we see a 'point of view' shot from the black man showing the dragging white man and the speeding gravel underneath, if the white man falls, the fugitives will both die. As the black convict drags up his comrade, first by the handcuffs and then by his jeans, we realise that they are finally safe. The moment the white man gets a secure hold on the boxcar, the frequency of the shots slows down a lot as though the race is now over. The pair of them roll onto their backs in the centre of the boxcar and we see top down view of them exhausted but safe. Here we are shown the same shot of the black mans face that we were shown at the beginning informing us that the flashback has ended. Both of the convicts sit up to see the mob emerge from the tunnel and realise that they are now free. The mob stops and stares after the train while realising all their effort was in vain. The convicts smile and lie down again. The final shot is from above and shows the fugitives catching their breaths. Over this image the audience is shown the Levi's symbol with some text stating that the jeans are 'riveted together for extra strength'. ?? ?? ?? ?? Daniel Teutsch 10AM 29-12-2001 Page 1 of 1 ...read more.