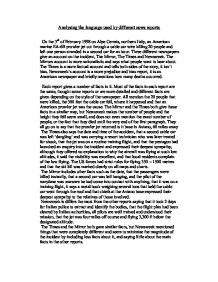 Analysing the language used by different news reports On the 3rd of February 1998 on Alpe Cermis, northern Italy, an American marine EA-6B prowler jet cut through a cable car wire killing 20 people and left one person stranded in a second car for an hour. Three different newspapers give an account on the incident, The Mirror, The Times and Newsweek. The Mirrors account is more nationalistic and says what people want to hear about. The Times is a more factual account and tells both sides of the story, it isn't bias. Newsweek's account is a more prejudice and bias report, it is an American newspaper and briefly mentions how many deaths occurred. Each report gives a number of facts in it. Most of the facts in each report are the same, thought some reports or are more detailed and different facts are given depending on the style of the newspaper. All mention the 20 people that were killed, the 300 feet the cable car fell, where it happened and that an American prowler jet was the cause. The Mirror and the Times both give these facts in a similar way, but Newsweek makes the number of people and the height they fell seem small, and does not even mention the exact number of people, or the fact that they died until the very end of the first paragraph. ...read more.

In each of the reports they have interviewed certain people. The Mirror interviews a couple from England on their ski holidays, as it is a typical British newspaper, and it also interviews local people and an owner of the hotel, just 100 yards from the cable line. The Times mainly interviews people of authority and also mentions what the locals have said about the incident. Newsweek also interviewed authorities, and also one local, who they made look like a fool. The Mirror first interviews a young British couple, who say they are glad they were not in the cable car, all through the report they keep quoting them, 'thank God we missed that car'. They also interview a police chief who describes the incident, 'The bodies were lying beneath sheets of metal. Most of them were torn apart.' This is to show some authority so people take the matter more seriously and take note of what is said, as they listen more to someone who has some sort of power over people. This is also true when the US defence secretary is quoted. The regional president is referred to and also the owner of a hotel not to far away from the incident, both of these are people of authority ...read more.

This also has short paragraphs. It also has two pictures at the bottom of the article. One is map of where about the incident happened, and the other a photograph of an EA-6B Prowler jet, to show what had caused the accident. Newsweek has a very different layout to the other to reports. It gives off a boring impression, there are no pictures or pull quotes, just the main heading, which reads 'Blood on the Snow' which gives no immediate indication to what the article is about, and a sub-heading reading 'After a U.S. fighter jet clips a gondola's cable, killing 20, Europe questions America's character.' The rest is all writing, with long paragraphs, unlike the other articles. There are no pictures or a lot of information about the incident in the headings because the Americans do not want to publicise the incident. I think The Times puts the whole story across most effectively, although The Mirror tells a lot of information it is very one-sided. The Times puts both sides across well, and still suggests the full horror of the incident. It has a good use of similes, which adds successfully to the dreadfulness of the accident. The language used and factual information given also help to make it easier to imagine what happened. ...read more.