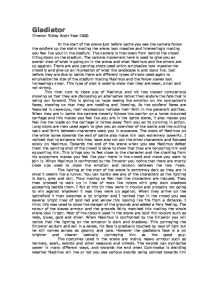 Gladiator Director Ridley Scott Year 2000 At the start of the scene just before battle you see the camera follow the soldiers up the stairs making the arena look massive and interestingly making you feel like your in the stadium. The camera is then seen from behind the crowd tilting down on the stadium. The camera movement here is used to give you an overall view of what is going on in the arena and what Maximus and the others are up against. There are also panning shots used which emphasize how massive the crowd is and give us an impression of what the landscape is and looks like. Just before they are due to battle there are different types of shots used again to emphasize the size of the stadium making Maximus and the fellow slaves look increasingly small. This type of shot is used to show that they are weak, small and not strong. This then cuts to close ups of Maximus and his two closest companions showing us that they are discussing an alternative rather then endure the fate that is being put forward. ...read more.

They then proceed to walk up in lines of rows like robots with grey dark shadows appearing beside them. I felt at this bit they were in trouble and probably not going to win against whatever it was they were up against. When they arrive on the battlefield it then becomes a lot brighter and I noticed that in the crowd you see several bright lines of bold red and yellow this looking like fire from a distance. I think this was used to show the danger of the grounds and added a fiery feeling. The colour of the slaves armour and the grounds fairly matched this making the whole scene look in tact. Most of the colours used in the scene are bold rich colours such as reds, blues, gold and silver. When Maximus is confronted by the Emperor you will notice that the lighting on the emperor is dark and shadowy. This portraying the Emperor as dark and evil in a sense, his face is gradually touched by rays of light but he still comes across as gloomy and pale. ...read more.

I think this was a classic act to keep you watching. When Maximus and his fellow slaves defeat them it really makes you want to jump up and down. The violence in the scene reveals the character of Maximus and encourages us to participate emotionally. I have noticed that the link in the scene to make it more interesting is that Maximus is seen as a slave however throughout the film has been conquering barbarians that eventually became slaves. The barbarians he defeated in Rome suffer the fate that is eventually his too. In the scene he also created skilful and powerful tactics which were acknowledged by the rest because by this time he has gained the respect of the fellow gladiators all of this portraying Maximus as a powerful leader and displaying his character. The plot of the film is that Maximus a roman general is favored over Commodus the power hungry son of the Emperor Marcus Aurelius. He is chosen to rule however Commodus has his family murdered and as he comes to Rome, he becomes a Gladiator and seeks revenge. The dialect in the clip also helps to communicate the whole theme of the film. ...read more.