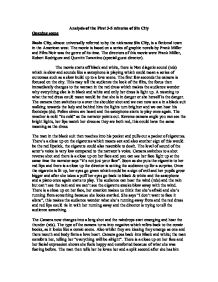 Analysis of the opening scene of sin city

Analysis of the First 3-5 minutes of Sin City Opening scene Basin City, almost universally referred to by the nickname Sin City, is a fictional town in the American west. The movie is based on a series of graphic novels by Frank Miller and Film Noir was the genre of its time. The directors of this movie were Frank Miller, Robert Rodriguez and Quentin Tarantino (special guest director). The movie starts off black and white, there is Non diagetic sound (nds) which is slow and sounds like a saxophone is playing which could mean a series of outcomes such as a slow build up to a love scene. The first few seconds the camera is focused on the city. This may tell the audience the look of the film, the focus then immediately changes to the woman in the red dress which makes the audience wonder why everything else is in black and white and only her dress is light up. A meaning to what the red dress could mean would be that she is in danger or she herself is the danger. The camera then switches to a over the shoulder shot and we can now see a in a black suit walking towards the lady and behind him the lights turn brighter and we can hear his footsteps (ds). ...read more.

Also whilst they are kissing they emerge as one and there mouth and body form a love heart. Camera goes back into Black and white; the man comforts her, telling her "everything will be alright". There is a close up on her face and her facial expression shows she feels happy and comforted because of what she was fearing before. The man then tells her he loves her and a split second after she has bin shot "silencer makes a whisper of the shot". The camera then looks down on the characters making the man look more venerable because he has a gun in his hand. He holds her in his arms and the audience can see the big raindrops (ds). The audience is still left in the darkness of the mystery of the lady, and what she was running away from because the narrator himself doesn't know "ill never know what she was running from". He was paid to kill her because he says "ill cash her cheque in the morning". The camera zooms out making them fade into the cities darkness and mysteries and the nds grows faster n louder and the city buildings form the words "sin city" in red (blood). Analysis "Sin City" elucidates tried and true themes of the film noir canon like isolation and desperation. ...read more.

The comics were straight up black and white (no shades of gray) with some spot coloring to highlight certain objects. In the comics, there was never any red blood. Blood was either black or white. It was white when it appeared on a black surface (like clothing), and black when it appeared on a white surface (like a face). This was simply for contrast, so that you could see it. The film attempted to mirror this look. However, when they tried to do black blood, they felt that it came out looking a little too much like mud. So in instances where the blood should have been black, it was turned red. Thus, in the film, blood is red when it appears on a light surface (like a face) and white when it appears on a dark surface (like clothing). However, there are two or three instances in the film where the blood does remain black (for instance, when Shellie is bleeding from the nose). It's not clear if the filmmakers just thought that the black blood looked fine in those instances, if they were just overlooked, or if there was some other reason that prevented them from using red blood. Highlight an object, for example the "Basin City" sign changes between the stories to hint that some time has passed in between, but there is absolutely no symbolism to the specific colour used. Of the comics that were adapted to the screen for this film. ...read more.