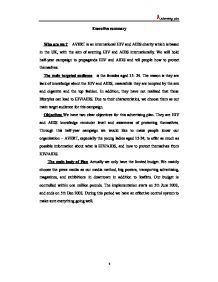 Executive summary Who are we ? AVERT is an international HIV and AIDS charity which is based in the UK, with the aim of averting HIV and AIDS internationally. We will hold half-year campaign to propaganda HIV and AIDS and tell people how to protect themselves. The main targeted audience is the females aged 15- 24. The reason is they are lack of knowledge about the HIV and AIDS, meanwhile they are tempted by the sex and cigarette and the top fashion. In addition, they have not realized that these lifestyles can lead to HIV/AIDS. Due to their characteristics, we choose them as our main target audience for this campaign. Objectives We have two clear objectives for this advertising plan. They are HIV and AIDS knowledge reminder level and awareness of protecting themselves. Through this half-year campaign we would like to make people know our organization - AVERT, especially the young ladies aged 15-24; to offer as much as possible information about what is HIV/AIDS, and how to protect themselves from HIV/AIDS. The main body of Plan Actually we only have the limited budget. We mainly choose the press media as our media method, big posters, transporting advertising, magazines, and exhibitions in downtown in addition to leaflets. Our budget is controlled within one million pounds. The implementation starts on 5th June 2003, and ends on 5th Dec 2003. During this period we have an effective control system to make sure everything going well. List of contents 1. Introduction 2. Communication environment 3. Promotional objectives 4. Segmentation 5. Target audience 6. Consumer behaviour impacts 7. Advertising methods and their schedules 1)Methods: * Posters and public transportation advertising * Magazines * Exhibitions 2) Methods' schedules 8. Resource allocation (Budget) 9. Control and evaluation > Introduction Seven thousands people die everyday from HIV/AIDS, AIDS has orphaned 10.4 million children and a staggering six young people are infected with HIV every minute, meanwhile there is still no cure for HIV/AIDS. ...read more.

> Advertising Methods and Schedules Posters and public transportation advertising G. Robert (1996) asserted that 'Anyone who regards posters as untargeted, unaccountable and unsophisticated had better think again. The industry has tackled these perceptions head-on, and now claims to be as sophisticated as rival media in the way it targets the consumer and measures their response '. In this advertising plan, posters are used as a main tool to propagandize the image of protection from AIDS. Moreover, three hundred thousand pounds will be spent on putting posters and the scheduled time will last six months. Advantage: 1)Location: Like the press it is visual only, and it is believed to be effective for reminder advertising. (D. Jobber, 2001, p.369) Therefore, the location where a large number of people pass daily is preferred. The shopping center, main road and the buses are chosen to put the posters. In details, one large poster is put in the shopping center of a certain city. Two large size posters are hung along two main roads of the city. Besides, the image of the posters is painted on the buses which shuttle around the city. 2)Message: As a method of outdoor advertising, a good poster can send the image and impress to more audience. D. Jobber (2001) argued that 'Simplicity is required in the creative work associated with posters because many people (for example, car drivers) will have the opportunity only to glance at a poster.' A picture and a few words may be enough to convey the information: protect yourself from AIDS. Disadvantage: Any class of advertising has its advantage and disadvantage. Posters and transportation are the same. Though they can receive the high reach, high frequency and low relative costs, yet they are difficult to measure. Magazines Another approach is to advertise in magazines. David W. Nylen (1986) argued that 'magazines, for the most part, are a more specialized medium in terms both of readers and advertisers'. ...read more.

Fill and Chris (2002) argued that 'Advertisements can be researched prior to their release (pre-test) or after they have been released (post-test). One of ways to determine whether advertising is effective is by asking target audiences if they recognize our advertisement. By asking them which parts of the magazine or layout were seen or read, we can know that whether or not they usually look at that sort of advertisement. (Fill. Chris, 2002, p. 742) in addition, as the result that the questioning process is simpler and quicker, the advantage of recognition test is the high reliability and the lower costs. Apart from above method to control our plan, questionnaire and mall-intercept interview also are good ways. Although we can use different methods to control or evaluate advertising plan, we must take into account all the relevant factors to ensure that significant results are obtained and that communications efforts are adjusted accordingly. Reference Erwin Ephron & Conlin Mcdonald, 2002, Media scheduling and carry-over effects: Is adstock a useful TV planning tool, Journal of Advertising Research, Jul/Aug, 2002, New York David W. Nylen, 1986, Advertising planning, implementation &control, South-western Publishing Company Fill, Chris, 2002, Markting communications David. Jobber, 2001, Principles & Practice of Marketing. McGraw-Hill. Frank Jefkins & Daniel Yadin, Advertising, 4th edition, Prentice Hall. John W. Oller Jr. & J. Roland Giardeth, Images that work - Creating successful messages in marketing and high stakes communication, Quorum Books, Westport, Connecticut, London G. Robert, 1996, Putting the show on the road in Marketing, London, June 20th, 1996. E.J. Betts and P.J. McGoldrick, 1996, Consumer behaviour and the retail "sales" Modelling the development of an "attitude problem", European Journal of Marketing, Bradford , Vol 30. issue 8. p40. J.R. Kelly, 1991, Commodification and consciousness: an initial study in Leisure Studies. Vol. 10, p7 C. Fill, 2002, Marketing Communications: contexts, strategies and applications. FT Prentice Hall. P537 Electronic Resources: http://www.unaids.org/barcelona/presskit/youngpeople/accessed13/03/03 http://www.lbp.org.uk/action/communications2.htm#Monitoring%20and%20Evaluation 13/03 http://proquest.umi.com/pqdweb?Did=000000009776306&Fmt=4&Deli=1&Mtd=1&Idx=2&Sid=9&RQT=309 http://proquest.umi.com/pqdweb?Did=000000115924753&Fmt=3&Deli=1&Mtd=1&Idx=1&Sid=4&RQT=309 http://www.unicef.org.uk/gettinginvolved/campaigns/aidshome.htm www.avert.org /about.htm what is AVERT? http://www.unaids.org/barcelona/presskit/youngpeople/ http://news.bbc.co.uk/1/hi/uk/1828801.stm http://www.avert.org/his81_86.htm http://business.baylor.edu/Phil_VanAuken//bcul.htm Advertising plan 3 ...read more.