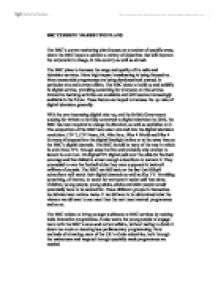 BBC CURRENT MARKETING PLANS The BBC's current marketing plan focuses on a number of specific areas, where the BBC hopes to achieve a variety of objectives that will improve the corporation's image, in this country as well as abroad. The BBC plans to increase the range and quality of its radio and television services. More high impact broadcasting is being focused on. More memorable programmes are being developed and created, in particular arts and current affairs. The BBC plans to build up and solidify its digital service, providing something for everyone on this service. Interactive learning activities are available and will become increasingly available in the future. These factors are hoped to increase the up-take of digital television generally. With the ever increasing digital take-up, and the British Government pushing for Britain to be fully converted to digital television by 2010, the BBC has been required to change its direction, as well as capitalise on it. The competitors of the BBC have also ventured into the digital television revolution. ...read more.

It also wants the young people to engage more with the BBC's news and current affairs, without having to dumb it down too much or showing less parliamentary programming. New methods of attracting more of the UK's ethnic minorities, both through the mainstream and targeted through specially made programmes are needed. Younger audiences appear to be a trouble area for the BBC, as they are supposedly failing to attract enough of them to programmes. Young people are greatly interested in new and existing technology. Programmes like Tomorrow's World could be created especially for young people, providing news and information on different inventions and modifications to existing technology. Currently there are not enough dedicated programmes to it. Nowadays the news appears to be very serious and bleak. To alter this more funny news and entertainment news should be shown. Ethnic minorities do make up a considerable amount of the UK population. These families of an ethnic minority whose first language is not English will speak their alternative language at home. ...read more.

Every organisation has targets like these, mostly to prevent institutional racism throughout the corporation. The BBC has a limited amount of money coming in to it. This is due to licence fees. The BBC plans to increase the amount of spendable money by, improving licence fee collection, reducing overheads and improving efficiency in programme production whilst maintaining quality of output. The BBC does have a cash flow problem, and improving it will inevitably free up money for reinvestment into the organisation. Most organisations have to streamline their business at some point to increase output or profit. It is better to streamline while in a stable condition as oppose to doing it when the company is already on its knees. Maintaining quality of output whilst improving efficiency is vitally important, as viewers will seek alternatives is programming quality is not up to the standard that is normally expected. The BBC values its reputation in the UK and abroad highly, and recognises that having a good reputation can help to sell programmes. The BBC wants to earn greater appreciation from UK audiences in relation to being an open, creative and trusted public service organisation. ...read more.