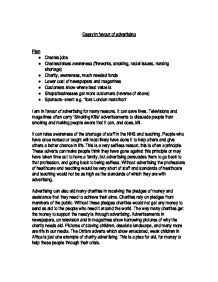 Essay in favour of advertising.

Essay in favour of advertising Plan * Creates jobs * Creates/raises awareness (fireworks, smoking, racial issues, nursing shortage) * Charity, awareness, much needed funds * Lower cost of newspapers and magazines * Customers know where best value is * Shops/businesses get more customers (reverse of above) * Sponsors- event e.g. 'flora London marathon' I am in favour of advertising for many reasons. It can save lives. Televisions and magazines often carry 'Smoking Kills' advertisements to dissuade people from smoking and making people aware that it can, and does, kill. It can raise awareness of the shortage of staff in the NHS and teaching. People who have once nursed or taught will most likely have done it to help others and give others a better chance in life. This is a very selfless reason, this is often a principle. These adverts can make people think they have gone against this principle or may have taken time out to have a family, but advertising persuades them to go back to that profession, and going back to being selfless. ...read more.

Advertising can lower the cost of newspapers, magazines and free websites. Companies pay newspapers and magazines to carry their advertisements of their businesses. This money can cover some costs in the newspaper so that the newspaper can be sold for less to the customer. Often, when you visit free websites, you are convinced to click on advertisements so that the webpage stays free. If nobody does then the website can close down, because, by clicking on the advert sometimes the owner of the website can get a small amount of money, this often goes towards keeping the website open. To argue against the point that it keeps magazines and newspapers cheaper, many people would rather pay more money than come across advertisements every few pages. This can get annoying and very repetitive, with many companies promoting their products and services more than once in each magazine or in more than one magazine. ...read more.

This could be a problem to our society, but I feel the messages against the usage of such dangerous products in advertisements, weigh out the counter argument of promotion of harmful substances. If there was no advertising many people would not know the dangers of smoking, fireworks, cot death, and many other dangers to society. People would not be as aware of racial discrimination, third world poverty, cancer, disabilities and other world issues. This is where discrimination starts. Ignorance is the biggest cause of discrimination. People would also not hear about these issues and many others, and therefore would not know that donations are required for the charities that care for the people who these charities are there to help. Without advertisement, people in the third world would have little aid, which may lead to more problems, and more deaths would be inevitable. Many people would be unemployed. This is why I am in favour of advertising. ...read more.