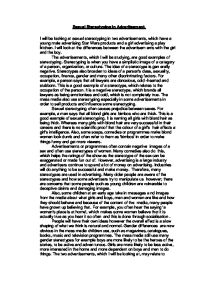 Sexual Stereotyping in Advertisement. I will be looking at sexual stereotyping in two advertisements, which have a young male advertising Star Wars products and a girl advertising a play kitchen. I will look at the differences between the advertisements with the girl and the boy. The advertisements, which I will be studying, are good examples of stereotyping. Stereotyping is when you have a simplistic image of a category of a person, organization, or culture. The idea of a stereotype is generally negative. Stereotypes also broaden to ideas of a person's class, sexuality, occupation, finance, gender and many other discriminating factors. For example, a person says that all lawyers are obnoxious, cold-hearted and stubborn. This is a good example of a stereotype, which relates to the occupation of the person. It is a negative stereotype, which brands all lawyers as being emotionless and cold, which is not completely true. The mass media also use stereotyping especially in some advertisements in order to sell products and influence some stereotyping. Sexual stereotyping often causes prejudice between sexes. For example, a man says that all blond girls are bimbos who are thick. This is a good example of sexual stereotyping. It is naming all girls with blond hair as being thick. Whereas many girls with blond hair are very successful in their careers and there is no scientific proof that the colour of a girl's hair affects a girl's intelligence. Also, some soaps, comedies or programmes make blond women look dumb and often refer to them as 'bimbos' in order to make things funny and get more viewers. Advertisements or programmes often contain negative images of a sex and often use stereotypes of women. Many comedies also do this, which helps the ratings of the show as the stereotype of the sex can be exaggerated or made fun out of. However, advertising is a large industry and advertisers continue to spend a lot of money on advertising. Industries will do anything to be successful and make money. ...read more.

Also, the contrasts in colours project the contrast of ideas for each sex. The girl leads a domestic life, which involves staying home and doing the chores whereas the boy leads an exciting, adventurous life, which involves him facing the real world. This is evidence of sexism and prejudice. The image of the boy projects an adventurous boy who lives life to the full whereas the image of the girl projects an obedient housewife who does not have many ambitions and is encouraged to be like her mother. However, the image of the boy shows he is trying to emulate the heroes from this super action film. In the advertisement with the boy, he has an aggressive look on his face, which reflects his need to fight, protect and defend. His facial expression looks as though he is determined, courageous and his eyes show how he is ready to fight. The way the boy holds the Lightsaber stick also adds to the image of this 'aggressive fighter.' However, in the advertisement of the kitchen, the girl is smiling and her facial expression expresses how happy she is. Her body language expresses how she is enjoying what she is doing and how comfortable and creative she is. This gives the message that girls will be and should be happy with cooking and doing domestic activities, as it's their job. Another point, which seems to be clear, is the difference in prices for the products in both advertisements. The girl's products come to a total of �17.99, whereas the boy's products come to a total of �148.90. That is a difference of �130.91. This is probably because of there being more products in the boy's advertisement but the big difference is also, because of how expensive the individual products are in the boy's advertisement. For example, a Jango Fett's Slave I Vehicle is priced �29.99. The product does not do much and is quite small. ...read more.

They see the great contrast in ideas as to how a male is expected to behave and how a female is expected to behave. They understand that male and females should not behave in the same way. Sometimes in cultures, the mother in the family encourages her daughter to get involved in domestic activities and is expected to help at home. However, the father usually encourages the boy to accompany him when going out and wants him to face the 'real world'. This is an example of how members of the family affect the way a child learns to behave. The advertisement from the catalogue is evidence that the mass media uses sexual stereotyping to advertise their product and can influence our behaviour. Overall, the two advertisements show the great prejudice relating to the roles of male and female. It projects the image that girls should be involved in domestic jobs such as cooking and cleaning and boys should be involved in exciting adventures, which involve facing the 'real world', something which girls are not fit for. These advertisements are good examples of sexual stereotyping and are evidence of how the mass media uses sexual stereotyping to promote a product. There are many differences between the girls and boys advertisement, for example, the cost of the products, the colours/ colour theme, presentation, language and number of products of the advertisements. These differences show that girls and boys are not expected to behave in the same way and should be different. The impact of sexual stereotyping is that stereotypical images of the sexes projected will be put into practice therefore the product will sell. Sexual stereotypical images also can affect the way a certain sex behaves thus the mass media can affect the behaviour of a person especially a child as they are much more vulnerable and unaware than an adult. Therefore, this advertisement is an example of how sexual stereotyping can project many messages about the way girls and boys should behave. Written By Samaya Ayaz ?? ?? ?? ?? ...read more.