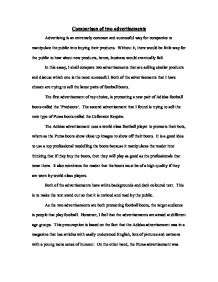 Comparison of two advertisements Advertising is an extremely common and successful way for companies to manipulate the public into buying their products. Without it, there would be little way for the public to hear about new products, hence, business would eventually fail. In this essay, I shall compare two advertisements that are selling similar products and discuss which one is the most successful. Both of the advertisements that I have chosen are trying to sell the latest pairs of football boots. The first advertisement of my choice, is promoting a new pair of Adidas football boots called the 'Predators'. The second advertisement that I found is trying to sell the new type of Puma boots called the Cellerator Respira. ...read more.

The Adidas advertisement explains that their boots can make you too so good, that they have to introduce a new rule when you wear them on the field. The rule states that if a player wearing the boots beats six opponents in one run, then he must stop and allow the beaten opponents to regroup. This part of the text is underlined so that it stands out from the rest, hence the reader should read it before any other text. The writing matches the picture because, as you can see, there is a drawing of Zinedine Zidane (a world renowned football player) wearing the boots and beating his opponents. The drawing supports the point that if you wear the Predators, you will be able to beat your opponents with ease. The Puma advertisement however, uses close-ups of their boots ...read more.