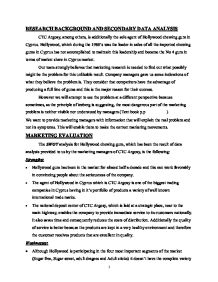 Hollywood chewing gum in Cyprus, why has its market share fallen.

RESEARCH BACKGROUND AND SECONDARY DATA ANALYSIS CTC Argosy, among others, is additionally the sole agent of Hollywood chewing gum in Cyprus. Hollywood, which during the 1980's was the leader in sales of all the imported chewing gums in Cyprus has not accomplished to maintain this leadership and became the No 4 gum in terms of market share in Cyprus market. Our team strongly believes that marketing research is needed to find out what possibly might be the problem for this unlikable result. Company managers gave us some indications of what they believe the problem is. They consider that competitors have the advantage of producing a full line of gums and this is the major reason for their success. However we will attempt to see the problem at a different perspective because sometimes, as the principle of iceberg is suggesting, the most dangerous part of the marketing problem is neither visible nor understood by managers (Text book p.p ) We want to provide marketing managers with information that will explain the real problem and not its symptoms. This will enable them to make the correct marketing movements. MARKETING EVALUATION The SWOT analysis for Hollywood chewing gum, which has been the result of data analysis provided to us by the marketing managers of CTC Argosy, is the following: Strengths: * Hollywood gum has been in the market for almost half a decade and this can work favorably in convincing people about the seriousness of the company. * The agent of Hollywood in Cyprus which is CTC Argosy is one of the biggest trading companies in Cyprus having in it's portfolio of products a variety of well known international trade marks. * The national deposit center of CTC Argosy, which is laid at a strategic place, near to the main highway, enables the company to provide immediate service to its customers nationally. It also saves time and consequently reduces the costs of distribution. ...read more.

* In part B, in all the questions that had the choice "other" we add the phrase "please specify". With this addition respondents are asked to be more specific and give us a more complete answer when choosing "other". Additionally in question 4 we add the phrase "please use the space below". * In part C, question 4 was unnecessary and therefore we deleted it from the questionnaire. Additionally, question 3 was rephrased because respondents could not understand if they were asked to comment on a specific gum brand or just on the flavor. * In part D questions 1,2,3,4,and 5 were rephrased because of grammatical mistakes. Question 7 was changed completely. Instead of asking the respondents to say which gum brand they think is the first in the market, we decided to ask them for the first three gum brands in the market. This change was essential because we would be given the chance to know if respondents rank Hollywood gum among the three first in the market. The second questionnaire was given to 4 people who sell or distribute chewing gums. Convenience sample was used again because people we know could give us better advice of how to correct questions. The following changes have been made for the 2nd questionnaire: * Question 2 was wrongly expressed because all the chewing gums are usually placed in front of the cash box. The question should aim to find out the order in which gums are placed. Is Hollywood gum more visible to customers than other gums are? * In Question 4 "Do customers usually demand a specific brand or do they go for the first they see" we added a 3rd choice, which according to pilot testing was very important. Customers sometimes ask to buy the new gum they saw in an advertisement recently. The 3rd choice will be "the one they saw in an ad recently". * We also added the following new question in the questionnaire: Does Hollywood gum take new customers? ...read more.

(See also the analysis of consumers' questionnaire). Question 5 is giving us the observation of the retailers of which gum brand has the biggest sales. The results of our analysis are the following: * Stimorol 90% * V6 30%, * Orbit 20%. These results show that Hollywood is not included in the first three brands that are mostly preferred and confirms the information we have received from the marketing department of CTC-Argosy. However it is in conflict with the perception of consumers. Based on the results shown on table 7 is concluded that retailers have not noticed any specific problem with the sales of Hollywood gum. A very important observation is deriving from the analysis of question 7 (table 8). The purpose of this question was to find out if there is a specific reason for a retailer to promote one brand more from the other. * 60% of the responders consider that a good reason to promote one brand more is the commission they received. CTC-Argosy should take this aspect very serious and if the commissions they offer are not competitive, they should reconsider it or revise their policy. The last conclusion we can reach through the analysis of the distributors questionnaire is that according to (table 9) 40% of the responders answered that new customers do not buy Hollywood gum. This implicates that its market share cannot be increased. For once again we stress the fact that CTC Argosy must give more value to Hollywood gum by identifying more clearly its characteristics. This should be done through heavy advertisement and other promotional techniques such as sponsorships. Additionally distributors should be treated in a more professional way because these people are the ones who are in direct contact with the consumers. The more the distributors are satisfied with the benefits they get from the suppliers the higher the possibility that they will promote the products of a specific supplier. 1 ...read more.