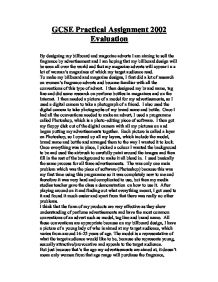 I am aiming to sell the fragrance by advertisement and I am hoping that my billboard design will be seen all over the world and that my magazine adverts will appear in a lot of woman's magazines of which my target audience read.

GCSE Practical Assignment 2002 Evaluation By designing my billboard and magazine adverts I am aiming to sell the fragrance by advertisement and I am hoping that my billboard design will be seen all over the world and that my magazine adverts will appear in a lot of woman's magazines of which my target audience read. To make my billboard and magazine designs, I first did a lot of research on women's fragrance adverts and became familiar with all the conventions of this type of advert. I then designed my brand name, tag line and did some research on perfume bottles in magazines and on the Internet. I then needed a picture of a model for my advertisements, so I used a digital camera to take a photograph of a friend. I also used the digital camera to take photographs of my brand name and bottle. Once I had all the conventions needed to make an advert, I used a programme called Photoshop, which is a photo-editing piece of software. I then got my floppy disk out of the digital camera with all my pictures on and began putting my advertisements together. Each picture is called a layer on Photoshop, so I opened up all my layers, which include the model, brand name and bottle and arranged them to the way I wanted it to look. ...read more.

The ways in how my billboard design are the same as professional products are that they contain a model(s) a tag line, brand name and an image of the actual bottle. The product is intended to communicate to mainly young women, this is why I have a chose a young model because the image of her represents the way young women want to look, its mainly all about fashion, the latest trends, the way to look and the smell. When people see the advertisement they may buy the product because that's how they want to look, they want to be fashionable and be up to date with all the latest trends and that's mainly why I chose that particular model. Also the model is very attractive and they may think by purchasing the product that's how they will look. One of the other reasons I think the advertisements will attract women is that the perfume bottle also looks like a handbag, this also plays a part of fashion and accessories which young women are also interested in. On one of my advertisements for a magazine I have included the brand name, tag line, model, a picture of Saturn fading into the background and the words "THE NEW FRAGRANCE FOR WOMEN" because I didn't include the ...read more.

As I have done research on fragrance advertisements, I have noticed that they all nearly show the same conventions of which I have named above. So now I would expect to see these conventions in basically all advertisements, because as I explained earlier everything is there for a reason, there not just put there for the sake of being there. So you see, everything works together, including the designs of the advertisement to how it's published by the media to sell the fragrance. Just to see if my adverts where appealing I asked my sister who is 20 years old if she would consider buying this perfume? She said yes, definitely as she liked the way the bottle looks and the model represents it's mainly for women around her age range, maybe a little younger and that the tag line is very effective of how it fits together with the brand name. So her answer to my question was yes, she would definitely consider it. By constructing this product I have learned all about producing fragrance advertisements and how they are advertised, and everything needed to make one. Also that it is important for the advertisement to contain all the necessary conventions needed, as they show the viewer all the information they need to no. ...read more.