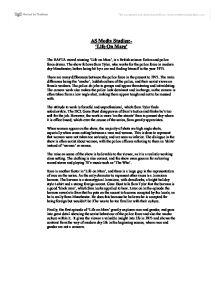 The BAFTA award winning ‘Life on Mars’, is a British science fiction and police force drama. The show follows Sam Tyler, who works for the police force in modern day Manchester; before being hit by a car and finding himself in the year 1973.

There are many differences between the police force in the present to 1973. The main difference being the ‘macho’, laddish culture of the police, and their sexist views on female workers. The police do jobs in groups and appear threatening and intimidating. The camera work also makes the police look dominant and in charge, as the camera is often taken from a low angle shot, making them appear tough and not to be messed with.

The attitude to work is forceful and unprofessional, which Sam Tyler finds unbelievable. The DCI, Gene Hunt disapproves of Sam’s tactics and thinks he’s too soft for the job. However, the work is more ‘on the streets’ than in present day where it is office based; which over the course of the series, Sam greatly appreciates.

When women appear on the show, the majority of shots are high angle shots, especially when cross cutting between a man and woman. This is done to represent that women were not taken too seriously, and are seen as inferior. The dialogue in the show is often sexist about women, with the police officers referring to them as ‘skirts’ instead of ‘women’ or names.

The mise en scene of the show is believable to the viewer, as it is a realistic working class setting. The clothing is also correct, and the show even goes as far as having record stores and playing 70’s music such as ‘The Who’.

Race is another factor in ‘Life on Mars’, and there is a large gap in the representation of race on the series. As the only character to represent other races is a Jamaican barman. The barman is a stereotypical Jamaican, with dreadlocks, a bright holiday style t-shirt and a strong foreign accent. Gene Hunt tells Sam Tyler that the barman is a good ‘black man’, which Sam looks appalled to hear. Later on in the episode the barman reveals to Sam that he puts on the accent to become accepted by the locals, as he is really from Manchester. He does this because he believes he is accepted for being foreign but wouldn’t be if he was to be too familiar with their culture.

Finally, the first episode of ‘Life on Mars’ greatly explores race and gender, and goes into great detail showing the sexist behaviour of the police force and also the macho culture within it.  It gives the viewer a valuable insight into life in 1973 and shows the contrast from the way of modern day life in the beginning scenes, where race and gender are not a concern.