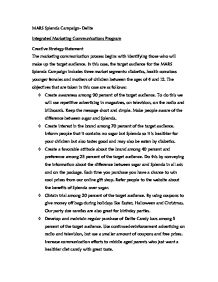 MARS Splenda Campaign- Delite Integrated Marketing Communications Program Creative Strategy Statement The marketing communication process begins with identifying those who will make up the target audience. In this case, the target audience for the MARS Splenda Campaign includes three market segments: diabetics, health conscious younger females and mothers of children between the ages of 4 and 12. The objectives that are taken in this case are as follows: * Create awareness among 90 percent of the target audience. To do this we will use repetitive advertising in magazines, on television, on the radio and billboards. Keep the message short and simple. Make people aware of the difference between sugar and Splenda. ...read more.

Our party size candies are also great for birthday parties. * Develop and maintain regular purchase of Delite Candy bars among 5 percent of the target audience. Use continued-reinforcement advertising on radio and television, but use a smaller amount of coupons and free prizes. Increase communication efforts to middle aged parents who just want a healthier diet candy with great taste. The key benefits of this product, Delite, are its low calorie, contains no sugar, and is a healthy alternative to a traditional candy bar. One approach that will be taken to express the key benefits of this product is finding the inherent drama behind being a diabetic and the restrictions it places on ones life. ...read more.

The main objectives are as follows: Create brand awareness and continue to increase brand awareness over an 8 month period though: -broadcast media to provide coverage to 75% of the target market over an 8 month period and in that same period reach 50% of the target market at least three times. -consumer magazine media to provide coverage to 45% of the target market over a 6 month period The budget that is allocated for spending on IMC in the United States totals $3.3 million dollars. Seventy-five percent, or $2,250,000, will be spent on broadcast media while the remaining $750,000 will be spent on magazine advertisements and other unmeasured forms of advertisements. A total of $300,000 will be spent on promotions which will include sampling nationwide and signage/special packaging for initial low prices. ...read more.