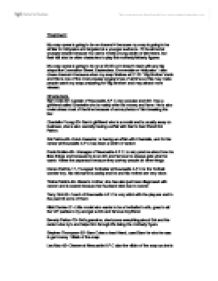 My soap opera is going to be on channel 4 because my soap is going to be similar to Hollyoaks and targeted at a younger audience. It'll be aimed at younger people because my cast is mostly young adults or late teens

Treatment My soap opera is going to be on channel 4 because my soap is going to be similar to Hollyoaks and targeted at a younger audience. It'll be aimed at younger people because my cast is mostly young adults or late teens, but their will also be older characters to play the motherly/fatherly figures. My soap opera is going to be on at 20:30 so it doesn't clash with any big soaps like Coronation Street, Eastenders, Emmerdale or Hollyoaks. I also chose channel 4 because when my soap finishes at 21:00 'Big Brother' starts and this is one of the most popular programmes of all time so this may make people watch my soap preparing for 'Big Brother' and may attract more viewers. Characters. Sam Cole-22- Captain of Newcastle A.F.C very popular and rich. Has a girlfriend called Chantelle who is mainly after his money and fame. He is also under stress most of the time because of some photos of him breaking the law. Chantelle Young-20- Sam's girlfriend who is a model and is usually away on business, she is also secretly having a affair with Sam's best friend Sol Patton. Sol Patton-28- Quiet character, is having an affair with Chantelle, and for his career at Newcastle A.F.C has been a victim of racism. Frank Mullen-65- Manager of Newcastle A.F.C, is very precise about how he likes things and because he is so rich and famous he always gets what he wants. ...read more.

He tells his grandma Beverly and she tells him to go straight to the police but he doesn't want the tabloids knowing what is going on. Sol is also having an affair with Chantelle and when he tells her what he has been receiving she doesn't seem to bothered, and Sol is guessing if maybe it his her because she knows where he lives. Sol pays someone to trick Chantelle but instead of tricking her they go straight to the papers and everyone is guessing who is sending them. Sol confronts Chantelle and she says it is not her, but when one of the postcards has finger prints on he takes it to the police and they find out that it was Terry Ord the coach. The reason he was sending them was to make Sol play better so the racism would disappear. Terry gets a �15,000 fine for internal harm and is thrown out of Newcastle A.F.C Sam and Stephen are out drinking in Morpeth in a quite pub. Sam is talking about how he misses Chantelle because she has been at work for a while and hasn't been home, Stephen suggests he takes some heroin to loosen himself up, Sam isn't to found of the idea but Stephen persuades him. They both go to the toilet and while Sam is sniffing his first ever line Stephen grabs his phone and starts taking pictures. ...read more.

Sol agrees because he wants no one knowing about them. Later in their affair there is a hitch when manager Frank sees them kissing. He confronts Sol and Sol says there's nothing going on so he goes and sees Chantelle she says that he is threatening her. Frank tries to handle it but it gets loose to the papers and Sol still says nothing ever happened but Chantelle says he threatened her over the relationship because he had no one else. Lea Mac who has worked as a cleaner at Newcastle A.F.C for eleven years has been recently stealing from the safe. She finds the safe key code in Franks draw and has a look inside she cannot resist and takes a batch of money. She takes �20,000 over a year and thinks she isn't going to get found out. Secretary David Ellison noticed the Clubs money is disappearing. David asks manager Frank if he has taken any he says no and says if there's money missing its David's fault because he is in charge of it. David knows its someone in the staff so he puts a new code on the safe and asks to see all the staffs bank balances for the past 6 months, everyone agrees to show there balances apart from Lea who fleas the club. The police find out and chase her down they find her and she gets three year in prison and all her belongings repossessed. ?? ?? ?? ?? ...read more.